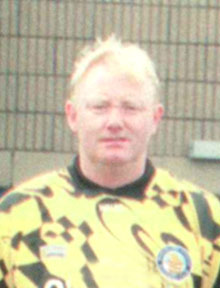 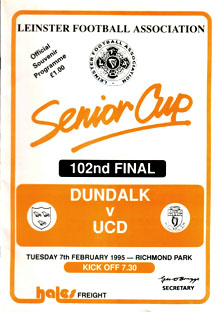 Just 18 years of age when he came to Dundalk for the 1981-82 season, goalkeeper Jody Byrne’s schoolboy grounding was with the Ringsend nursery Cambridge Boys Club. Signed as cover for Richie Blackmore, he got few opportunities at Oriel Park and his only first season opportunity came in a Leinster Cup game against Drogheda in Oct 1981.

1982-83 offered a few more first team opportunities but come season end he had accumulated a grand total of just seven appearances, two of them in the League. He did, however, have a ‘B’ Championship medal when Dundalk Reserves, managed by Mick Leech, had a massive 17-point gap to spare at the finish.

Jody was one of Jim McLaughlin’s early signings for Shamrock Rovers, controversially ousting Milltown favourite Alan O’Neill and for the following seven years he was the first name on the Hoops team sheet, racking up a total of 302 competitive games and collecting all the honours.

He was a member of Rovers’ four-Championships-in a-row squad, and had the distinction of playing more games than any other member of that squad. In addition he finished with three FAI Winner’s Medals, missing out on another foursome when UCD were the shock winners in 1984.

Jody stayed loyal to Rovers after the loss of Milltown and was twice voted Shamrock Rovers Player of the Year, in 1986-87 and 1988-89, before leaving at the end of the 1989-90 year to join Shelbourne. The Reds having spent nearly 30 years in the doldrums, finally came good and over a four year spell at Tolka Park Jody improved his memento collection with another Championship medal (1991-92) and a fourth FAI Cup medal (1993).

Jim McLaughlin had been General manager at Shels during the League Championship victory and another of his Hoops managers, Dermot Keely, took him to Dundalk after he was released by Shelbourne, more than ten years after his first Oriel spell. His championship medal count swelled to six after Dundalk shocked the pundits when ‘stealing’ the 1994-95 League with a last day victory against Galway while main contenders Derry City and Shelbourne were stumbling badly within sight of the finishing line.

Jody didn’t play on the final day—he had spent the year sharing the custodian’s duties with Eddie Von Boxtel, ending up with 25 appearances against Eddie’s 23. They had both made handsome contributions to a superb defence that had maintained 17 clean sheets—Jody supplying seven from fourteen League starts and Eddie had 10 from 19 starts.

At his next port of call—Cork City—he was first choice keeper with a club that made all the headlines but for the wrong reasons, having points deducted for playing an ineligible player, going into liquidation in January 1996, were then saved from extinction and finished the year at Turner’s Cross, having started at Bishopstown.

The 1996-97 year brought Jody to Waterford, who tied Drogheda for Division One runner up spot but missed the automatic promotion place on goal difference and then lost in the two-leg play-off against Dundalk. Jody had been a 27-match ever present during the season.

He started the following year at Waterford but after five League games he switched to Finn Harps. While Harps were struggling, just holding on to their Premier Division status, Waterford were easy winners of Division One and Jody went back to them for their 1998-99 return to the Premier Division.

His last ‘action’ came during the run-in to the 2001-02 League title when Champions-elect St Patrick’s Athletic signed him in February as cover, but it was all in vain—Pats 5-points victory was transformed in the committee rooms into a 10 point deficit, first via the Paul Marney affair and finally when the improper registration of Charles Mbabazi Livingstone was discovered and the Reds become the first ‘asterisk’ League of Ireland Champions.

After his playing days finished, clocking up more than 400 league games, he had spells as goalkeeping coach, at Drogheda and at St Patrick’s Athletic.

It was inevitable that over his 20-year goalkeeping career he would make the headlines. At Tolka Park on St Patrick’s Day 1992, when Shels were on their way to their first Championship victory in 30 years, Jody was sent off against Derry City and conceded a penalty after 27 seconds play, leading to a 5-0 loss!

And in what was, arguably, the most amazing League game in years, a 5-4 victory for Shelbourne over Monaghan at Gortakeegan in October 1993, Jody contributed to the fun and games by scoring after half an hour to leave the Reds ahead by 4-0—he launched one from his hands that was missed by two defenders and went in over the opposing keeper’s head! In an extraordinary comeback, the home team recovered to tie the game at 4-4, went behind again and deep into injury time had a Mick Byrne goal disallowed!!