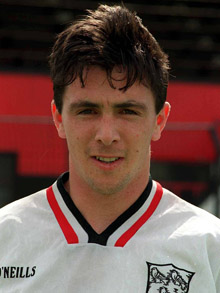 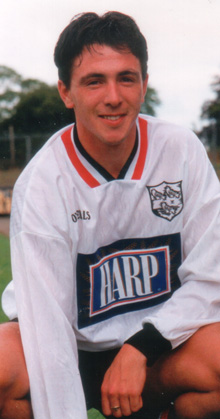 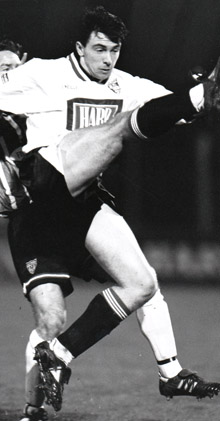 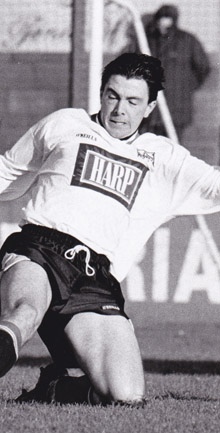 After a half dozen appearances he went on loan to Limerick City for a couple of matches and finished his initial season with Longford Town, joining them in February 1991, marking his debut year with appearances for three clubs.

He spent the next two years as a near ever-present at Longford, coming to the attention of Dermot Keely, his manager for the 1992-93 year, when Longford earned the title of the most improved team in the First Division, shooting up from last place in the previous season to just three points off a play-off spot. When Keely took the reigns in Dundalk the following November, Stephen became his first signing.

Apart from his versatility, Keely liked his penchant for scoring and although he spent most of the League campaign either at full-back or midfield, he was the club’s leading marksman, topping both League (9) and All Games (11) scoring charts.

He played in practically every out-field position in that season and he even won a watch for scoring after 70 seconds in a League Cup tie against Shamrock Rovers!

His February 1995 hat-trick in a 6-0 victory against Monaghan turned out to be a bit of a rarity—it would be another 15 years before Oriel Park patrons would see another League triple-strike when Fahrudin Kuzodovic did the business during the 2010 season against Galway.

After the 1994-95 Championship victory he stayed for the following term, playing in both legs of the UEFA Cup tie against Malmo, but at the end of a disastrous year, which saw a first round Cup loss to local rivals Drogheda followed by the departure of Dermot Keely, Stephen left for Finn Harps, recently promoted to the Premier Division.

Against a background of euphoria from the promotion, a bitter dispute broke out between the Harps committee and a consortium offering to take control of the club. Eventually it was decided to form a Co-operative Society to take control.

In the midst of this coming and going manager Dermot Keely left and Charlie McGeever took over. Stephen was an ever-present in a season that saw the Harps successfully competing with Dundalk to avoid the play-offs. But a cruciate injury—a legacy of his Dundalk spell—knocked him out for most of the next two seasons.

He started the 1998-99 season at Ballybofey and spent the second half back for a second spell with Longford, where promotion in 1999-00, just two points behind Champions Bray Wanderers, was followed by a losing FAI Cup final appearance against Bohemians.

Stephen was the hero of the semi-final replay victory over Waterford when his 76th minute penalty was enough to earn Longford’s first Cup final day and a place in the UEFA Cup draw—a commendable 1-1 draw at home against Bulgarian side Liteks.

Although contemplating retiral, he was tempted by manager Jimmy Greene and joined Athlone as a player in the 2002/2003 season. He served as team captain for two years before taking over as caretaker manager after the mid-2004 season departure of Aaron Callaghan, with the appointment made permanent at the end of the season.