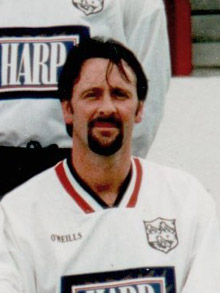 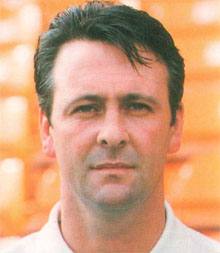 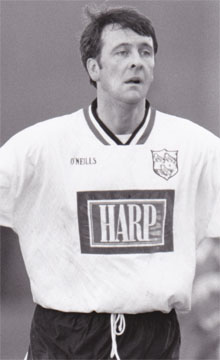 Mick Byrne had thirteen very successful seasons under his belt when he first wore the Dundalk colours in 1991-92. His second stint at Oriel Park was in the Championship-winning 1994-95 season.

Arriving from Sligo Rovers in January 1992, he left after three games, finishing the season with Shelbourne where he made a number of substitute appearances as the Reds finally won the League championship after a 30-year wait in the doldrums.

He was with Monaghan for the following season, when his 15 goals helped the Mons to the play-offs, and where they earned their first Premier Division entry after defeating Waterford. With Monaghan for three seasons, financial circumstances forced him to move yet again and Dermot Keely snapped him up to help in Dundalk’s 1994-95 championship drive.

Hampered by hamstring problems, he was one of four number nines that contributed to the pennant victory —sharing with Warren Patmore, Joe Hanrahan and Peter Withnell—pitching in four goals from his eight games.

His substitute appearance against Malmo in the UEFA Cup was his seventh European outing—he had made six appearances with Shamrock Rovers. He finished out the season with Shelbourne and then closed his National League career in 1996-97, playing a single match as a substitute with Shamrock Rovers and filling out his career League games to 363 games and 116 goals.

With Rovers he had won three consecutive League-Cup Doubles in 1985, 1986 and 1987 and for the 1986-87 season he was awarded both the PFAI Player and SWAI Personality of the Year Awards. He had spells with Dutch club den Haag and also Huddersfield Town.

In 1996 he managed St. James's Gate F.C. for two games, playing once, before their resignation from the league. He then returned to Rovers as assistant manager to Pat Byrne before taking over for the 1997/98 season. In his first season in charge he guided the club to a win in Europe but his second season ended badly as Rovers finished 8th and he was replaced by Damien Richardson.