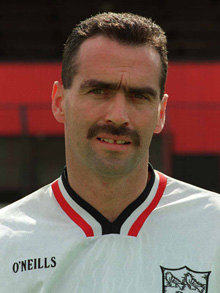 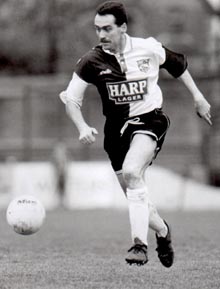 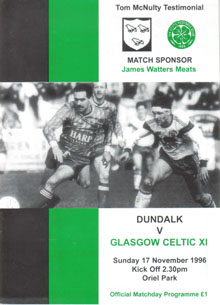 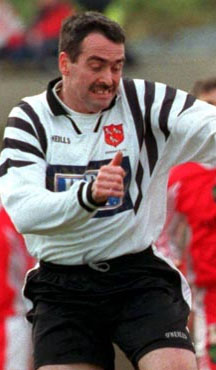 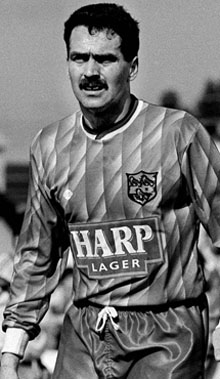 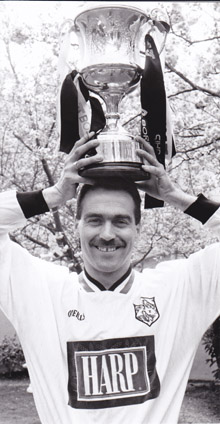 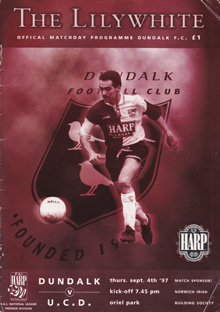 Let’s start with the goals—on March 30th 1986 the Jim McLaughlin-managed Shamrock Rovers came to Oriel Park, requiring a point to win their third successive Championship but the champagne had to be put on hold thanks to Scottie’s lone goal in the 85th minute.

While the Hoops finally made it over the finishing line, Bohemians were not so fortunate seven years later, when Tom’s Oriel Park April 1993 match-winner on the last day of the season denied them their first title in almost two decades.

But the sweetest of all was his key role in two Dundalk League victories—1991 in Cork when he broke the hearts of the locals with his last day match and championship-winner, a feat he repeated against Galway in the memorable 1995 Oriel Park last day heroics that stole the title from under the noses of the frontrunners and red-hot favourites Derry City.

For fourteen seasons and almost 500 games, Tom McNulty was central to Dundalk—a hard mean ball-winner—and that was when he didn’t have the ball. When he did, he displayed the attributes of all outstanding midfielders—vision, great heart, stamina, a fierce will-to-win attitude and could pass a ball with deadly effect.

Scottish-born, he played left-back on a schoolboy team that included Paul and Willie McStay (Celtic) and Colin Walsh, who went to Charlton Athletic. The team lost just three games in four seasons! He spent a year with Partick Thistle Youths before heading for Dundalk where his father had opened a sports shop.

Starting locally with Park Rangers in the Second Division of the Dundalk Junior League, John Murphy acquired him for Bank Rovers and he played a key role in their successful FAI Cup run in 1984, defeating Ballyfermot United in the first round proper and going out to Waterford United in the second round.

Tommy Connolly secured his signature for Oriel Park and after scoring twice on his first club outing in a Donegan Cup game against Drogheda, he scored the only goal on his League debut against new club Cork City, on their League debut.

He was the first winner of the Supporters Club Player of the Month Award and missed just three games in his first season, making an appearance in 36 of the 39 competitive games.

He went through a sticky patch at the beginning of his second term and was on the verge of moving—Newry or Monaghan were the probables—but the departure of Roddy Collins and an injury to Larry Murray saw Tom return to first team duty in December, where he remained for the rest of the season.

In his third club season he pocketed his first senior medal when Dundalk defeated the Dermot Keely-managed Shamrock Rovers in the final of the League Cup but this was the Hoops’ year and Turlough O’Connor had to be satisfied with runner up awards in both League and FAI Cup.

A falling out with manager O’Connor ended up with Tom spending a couple of seasons with Finn Harps in the First Division under manager Chris Rutherford. Although always in contention for promotion, at the business end of the season Harps kept coming up short. [Finn Harps stats: Played 53 and 6 goals, of which League 45 and 5]

After two seasons at Ballybofey Tom accepted Turlough O’Connor’s offer to return to Oriel Park for the 1989-90 year, collecting the Player of the Year Award while another O’Connor assault on the Premier Championship was in the planning.

Paired in the middle of the field with Gino Lawless—not much got past Gino—Tom had the freedom to get forward more often. His ten League goals in 1990-91, supplementing Peter Hanrahan’s 18 and Terry Eviston’s 10, was his most goal-productive season and added a crucial element to O’Connor’s options as Dundalk swept to an impressive League victory.

For Dundalk supporters the icing on the 1990-91 Championship cake was the sight of McNulty in the Turner’s Cross last day decider slicing through the Cork City defence in the 73rd minute to score off the post and wheeling away in a victory salute.

A number of seasons down the road, Tom found himself under the management of the no-nonsense Dermot Keely, with only James Coll and Martin Lawlor as survivors from the 1990-91 victory.

A single point from the first three League games of the 1994-95 campaign and the management board flying distress signals with the threat that the club was close to going under, was the most unlikely position from which to launch an attack on the League Championship.

But in probably the most remarkable achievement in its 70 year history, the capitulation of pace-setters Shamrock Rovers and Cork, coupled with the last day failures by the other contenders, Derry City and Shelbourne, saw outsiders Dundalk win their last day game against Galway and collect their ninth League Pennant.

And McNulty played a pivotal role in the last day heroics. In the 75th minute of that match, with the game scoreless, Tom perceptively galloped through the advancing Galway defence, collected Eddie Van Boxtel’s kick-out and coolly gave Dundalk the lead which they retained to the final whistle.

If the April 1995 dramatics closed the book on the 33-year old Tom McNulty’s Championship heroics, there still remained another five Oriel Park seasons and even if the legs weakened and the box-to-box runs became less frequent, there was no lessening in the commitment to the jersey.

There remained one more reminder of Oriel Park’s reputation as a graveyard for League title favourites. In the final match of the 1997-98 season Dundalk’s shock 2-1 victory over leaders Shelbourne gifted the league title to St Patrick’s Athletic. And, yes, McNulty was again involved in the action.

He closed his National League career in 1999-00 under Terry Eviston during the club’s first visit to Division One, having served under a total of seven managers, including Tommy Connelly, Turlough O’Connor, Dermot Keely, John Hewitt, Eddie May and Jim McLaughlin.