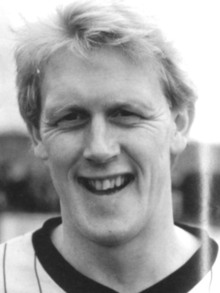 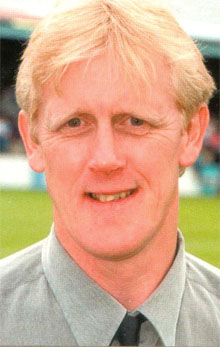 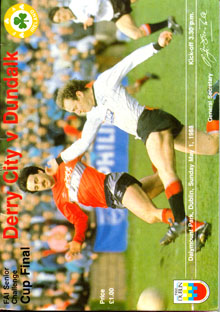 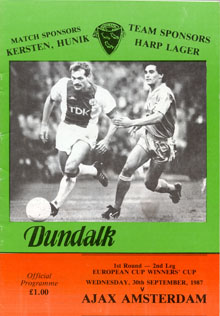 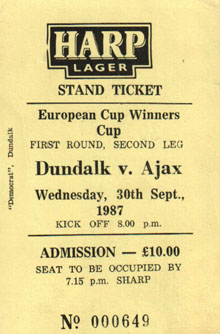 Centre-half Harry McCue progressed to the Home Farm U12 squad via Dublin Fruit Markets team St Michans. Over eight years with Home Farm under age teams, Harry collected all the schoolboy honours including an entry in the Guinness Book of Records for the squad’s 79-game winning sequence, without a loss or a draw in sight!

He earned one Youth International cap against Glasgow Celtic and made his League of Ireland debut in the 1975-76 season, before moving to Shamrock Rovers, then under Sean Thomas, for the 1976-77 season. But the arrival of Johnny Giles, followed by a new set of players at Milltown, meant no first team football for Harry. When Sean Thomas took over at Athlone Town Harry was one of a number of ex-Hoops to end up at St Mel’s Park.

After summer stints in the North American League with San Diego Sockers, Harry moved for a couple of seasons to Glentoran, where he added an Irish League runner up medal and an Ulster Cup winner’s memento to his growing honours collection. [With Glentoran: 29 Appearances and 1 goal.]

He spent the last few months of the 1984-85 term on loan to Drogheda but in spite of the best efforts of Harry and of the veterans Miah Dennehy and Mick Fairclough, they couldn’t prevent the Boynesiders dropping into the newly-formed Division One.

Harry didn’t delay long after getting an invitation in 1985 to join up again with Turlough O’Connor, recently arrived as manager with Dundalk, where he linked up with a number of former Athlone colleagues for another trophy-fest. After runners up spots in both League and FAI Cup in 1986-87, Turlough O’Connor added Paul Newe, John Cleary and Michael O’Connor to the squad for the following year.

To its many admirers this was one of the best panels ever to serve the club, stuffed with experience and strong characters, with no one guaranteed their starting place. As a result of an early season injury Harry found it difficult to displace the in-form John Cleary and Joey Malone.

But a sticky and nervous March saw team changes and Harry was restored for the Cup quarter final against Cork, retaining his place through the memorable and incident-packed closing stages of the season which delivered the club’s second League-FAI Cup Double.

For the Cup final victory over Derry City O’Connor’s 3-5-2 tactics worked perfectly, with Malone, Cleary and McCue closing everything down at the back and releasing Martin Lawlor and Gino Lawless to move forward as wing-backs.

The Cup final would be Harry’s last League of Ireland game—shortly afterwards he emigrated to Australia and over the following nine years collected more honours, playing and coaching with Warringah Dolphins in the New South Wales State League.

During his three playing seasons he made 52 appearances, and he spent his remaining six seasons as a coach, initially as a youth coach and then first team coach, landing the League and Cup Double in the 1994-95 season.

When he returned to Ireland, Harry became assistant manager to Martin Lawlor at Premier Division Drogheda United in October 1997, but after just two League wins in the season—each against Dundalk—it was back to the First Division, to be followed by an immediate return when Drogheda were crowned Division One Champions for the third time. A familiar bottom of the Premier table position by December brought Martin Lawlor’s departure and the arrival of Eddie May, who saw the season out as Drogheda returned yet again to the First Division.

After nearly three years as assistant, Harry was appointed top man in June 2000 but a horrific season that included financial constraints, poor gates, player wage cuts, all aggravated by the foot and mouth scare, ended with Drogheda in second last place and the ignominy of applying for re-election for the first time in its existence. Through it all the board had faith in Harry and the quick reward was another First Division title (2001-02) and promotion to the Premier Division.

It took the play-offs before Drogheda held on to their Premier status at the end of the 2002-03 season but by August 2003, in the first Summer season, the prospect of another relegation dog-fight was on the horizon, and nearly six years after he had arrived Harry was sacked, to be replaced by Paul Doolin.

Harry’s father was one of the great characters of the League of Ireland scene in the Fifties and Sixties. A centre-half who played with Bohemians, Limerick and Waterford, he was known as a tough-tackling no-nonsense defender. He later managed with Home Farm, Bray Wanderers, St Patrick’s Athletic and Garda. While with Bohemians he won a number of Amateur caps and he was a member of the Limerick team that won the League Championship in 1959-60.

In that same season he was a founder member of the Professional Footballers Association of Ireland and he was honoured for his services in 1985-86 when the PFAI honoured him with their Special Merit Award.

Harry junior also served the PFAI—he was chairman in 1987-88—and in 2003 he was elected as the first chairman of the newly-formed Football Managers Association of Ireland, an organisation that had been formed to provide advice and representation for managers involved in the senior game.

He spent time as project manager for the 6 FAS/FAI Development Courses in Ireland that prepared young players for a football career.

Now in his fifties, he keeps himself on trim and turned out with the Dundalk Veterans in a December 2010 tournament held at the National Basketball Centre.