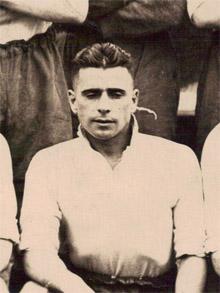 Defending League Champions Dundalk, missing goal-scoring inside forward Jimmy Mitchell and full-back Gordon McDiarmuid from the League-winning panel, moved in early October 1933 to strengthen their squad. A new full-back, Tom Neale—allegedly transferred for £1,200 from Birmingham to Sheffield Wednesday—survived only half a dozen games before moving on.

Making his debut on the same day as Neale was inside-forward Jack Atkins and he stayed for the season. Previously with Ebbw Vale and Merthyr Town in the Southern League, Jack settled in at inside-right and struck up a productive relationship with his wing-partner Eddie Carroll, helping Eddie to a 19-goal haul.

An excellent playing season came to a crashing halt in March, losing in the semi-final of the FAI Cup to Cork in a second replay and blowing a winning League position when losing the last three games, all to bottom of the league placed teams.

Off-the-field there were financial problems that led to crisis public meetings in January and at season end Atkins was one of a number of the professional staff who were released.

His lone competition honour came in the President’s Cup when Dundalk lost in the final to Shamrock Rovers, after defeating Shelbourne and Bray Unknowns in the earlier rounds.

For the following year Jack linked up again with Eddie Carroll, this time in the colours of Dolphin and their very effective right-flank partnership played a major part in Dolphin’s successes—wins in the League Championship and City Cup, runner up in the Shield and a semi-final berth in the FAI Cup, going out in a replay to ultimate winners Bohemians.

In the League Jack contributed 8 goals and Eddie was credited with 7. It was reported in the middle of April 1935 that Jack’s playing contract had been cancelled by mutual consent.

A miner from the age of 14, his early football was with Southern League club Mid Rhonnda United. In 1928 he moved to Ashford (Kent) to work and spent a number of years with the local team before returning to the Rhondda Valley.

When his playing days were over, he returned to mining until conscription saw him on Army service, seeing duty in Italy and Egypt before being demobbed in 1945. After a serious mine accident in 1950, when he was trapped following a shaft collapse, Jack moved to a local engineering factory.