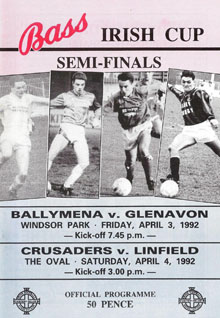 In 1990 he had been capped with the Irish League team. With Glenavon he won an Irish Cup medal following the 1992 2-1 final defeat of Linfield, after scoring twice in the semi-final victory over Ballymena.

He had also collected three League Cup awards while with Glenavon and scored in the away leg of their European Cup Winners cup tie against Aarhus of Denmark.

Acquired by John Hewitt in October 1996, he made a favourable impression on his Oriel debut, scoring against Shamrock Rovers, and was club Player of the Month for October but due to team injuries and suspensions he was switched between right-back and midfield.

It was a disastrous season that finished with Dundalk fighting for their Premiership membership in a play-off against Waterford. He was much less active for the following year under Jim McLaughlin, making just 2 League appearances in December.

After departing from Oriel Park he had short spells with Bangor and Cliftonville.