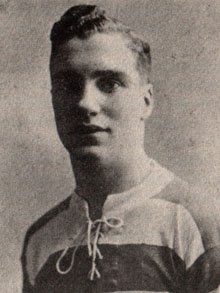 Wing half Billy Pollock was a member of the Belfast Celtic squad that won four League Championships in a row from 1925-26 to 1928-29. He was still around when Joey Donnelly collected his Championship medal after Celtic were again victorious in 1932-33.

During nine seasons with Celtic, from 1924/25 to 1932/33,he made almost 300 appearances. Born in Monaghan, his father had been in the Irish Army and Billy lived south of the border for many years before moving to Belfast when in his teens.

He came to the attention of Senior clubs through his performances with Glenbank Swifts in the Falls Minor Leagues and especially after he had been selected to play against the North-West League in Derry at the end of the 1923-24 year.

He started the following year with Ligoneil and after some competition for his signature between Barn United and Belfast Celtic, he ended up at Celtic Park. A sports all-rounder, he was good enough to be chosen on the Ulster Junior hockey team to play against the Leinster Juniors.

A Belfast Celtic legend, he was as solid as the proverbial rock and one Celtic poem describes him as ‘stonewall Pollock’. He was a member of the powerful 1925-26 squad that scooped all the major awards—Irish League, Irish Cup, City Cup and Gold Cup. He went on to receive Amateur International honours.

Notwithstanding his commitments to Belfast Celtic, on their way to a another Championship pennant, due to the influence of Joe McCleery with his old employers Billy was freed to help out during Dundalk’s first Free State League season, doubling up at weekends when Celtic played on Saturday and Dundalk on Sunday.

It was the middle of November, a week after he had made his Amateur International debut against England, before he made his first of nine Dundalk appearances. A year later he got another Amateur cap, also against England, and he was later honoured four times by the Irish League selectors.

In February 1928 he travelled to Paris with a mixed amateur and professional team to play France, losing 4-0. This match has only recently been recognised as a full International.