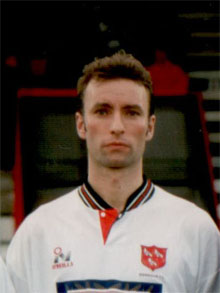 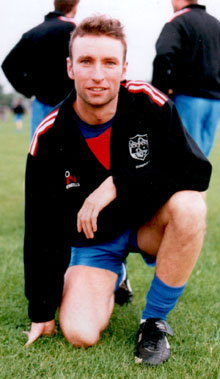 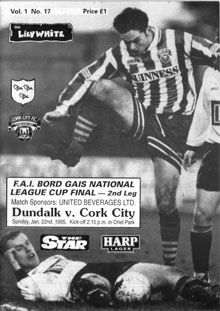 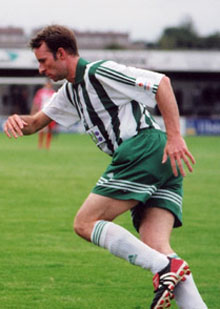 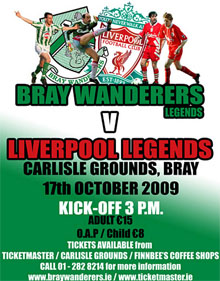 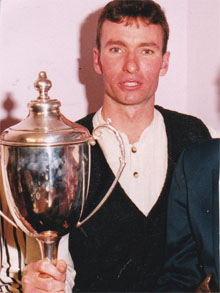 Leinster League clubs Belleview, Valeview Shankill and Palmerstown Rangers were Mick Doohan’s preparations for the League of Ireland when he signed for Bray Wanderers 1988. Starting as a left winger, he eventually settled for a central defence role and for three seasons running he was the club’s leading appearance maker.

After a third place League spot in his first season, pipped on goal difference by UCD for relegation, there was another third spot in the following year. But league affairs were overshadowed by the happenings in the FAI Cup.

Shock wins over League contenders Cork City and then the previous year’s Treble-winners Derry City in the semi-final, saw Bray through to a final confrontation with non-League team St Francis in the1990 final. A hat-trick by John Ryan sealed an historic victory at Lansdowne Road for the Seasiders.

The 1990-91 season brought further Bray glory, first in holding Turkish side Trabzonspur to a home leg 1-1 result and finishing the year in second place to Drogheda in the League Division One, earning promotion to the Premier Division.

Mick said ‘yes’ to Turlough O’Connor, who came looking for a replacement for Ronnie Murphy for the 1993-94 term, but shortly into the season Turlough left to be replaced by Dermot Keely.

A nervous period for Mick while he was studying for his final accountancy exams saw him on the bench for a while until coming on as a sub in a vital FAI Cup game against Galway. Sent up front during extra time and the match tied at 3-3, he scored the winner. He continued to score, giving Dermot Keely an invaluable option, which he used to telling effect during the 1994-95 season.

With no shortage of excellent defenders in the squad—Purdy, Coady, Coll, Whelan, Lawlor, Long and Kelly—Mick found himself up front, hassling and harrying for every ball and chipping in six goals towards the Championship victory, scoring a couple of late, late winners in vital games.

Two late season efforts stood out, first his role in a key 2-0 victory over Derry, scoring one and making the other for Peter Withnell, and his last day strike against Galway that sealed the club’s ninth Championship pennant. There was no quibbling when he was voted Player of the Year.

For his remaining time at Oriel Park Mick continued to feature on the score sheets, but to an increasing extent he was required at the heart of the defence. His last club match in November 1998—a sensational victory over League leaders St Pats—was followed by a financially induced clear out, which lead to Mick returning to Bray Wanderers for a fee of £7,000.

Both Dundalk and Bray were relegated at the end of that season, but Mick had the consolation of a second FAI Cup winner’s medal—nine years after his first—when Bray defeated Finn Harps in a second replay. In the following season the Wanderers bounced straight back up to the Premier Division and Mick added a Division One Championship medal to his honours collection.

When he finally called a halt after 15 seasons, he had made more than 400 League appearances and had his name on 45 League goals. He made 6 appearances in European matches with Bray (4) and Dundalk (2).

Mick’s returned to Oriel Park in November 2009 when he lined out with Dundalk Legends, 2-1 winners over Manchester United Legends.

After the 1994-95 Championship victory, Dermot Keely singled him out as being “an outstanding cog in the team’s success. His versatility enabled us to cope successfully with the different crisis situations caused by suspensions and injuries. And his half a dozen goals came in useful!!”