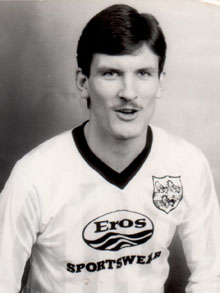 Signed by Tommy Connolly in November 1984 on a month’s trial to improve an under performing forward line—frontmen John Cleary and Jonathon Speak had ran in three league goals between them in the first nine games—centre-forward Billy Wright quickly made his mark in more ways than one. A goal on his debut in a 2-1 victory over Shelbourne in the middle of November was just the beginning.

By the middle of December he had made it four goals in five games and after a double against Drogheda in early January and another single a week later against St Pats, Billy had stretched his run to seven goals after nine matches, pushing Dundalk into a top four spot. By then he had been signed until season’s end. During these two months he was also attracting the attention of referees and making more headlines—at this stage he had run up 20 penalty points and was suspended for one game.

Aggressive.. combative.. feisty.. were some of the press descriptions. No doubt Dermot Keely would have found a few other words after a particularly tempestuous Oriel Park 1-1 confrontation against Jim McLaughlin’s champions-elect Shamrock Rovers that saw Wright booked yet again, and Keely ending up with stitches on an injured shin.

Dundalk’s season imploded from February onwards with just one win from the last 13 league games and that one win—a lucky 1-0 against bottom club Longford Town with Billy providing the winner—was sufficient to avoid the dreaded drop to the about- to-be inaugurated Division 1. Billy’s earlier form deserted him during this slump. Never the less, his 8 League goals (from 19 games) tied John Cleary’s 8 (from 30 games) for the title of League Top Scorer.

He had started his senior career in January 1981 as an apprentice with Burnley and when he left after eighteen months his only senior football had been three games in 1982 while on loan with Crewe Alexander, scoring once. The season before coming to Dundalk he had spent in Cyprus with Apollon Limassol, finishing in third spot in the Second Division, missing promotion by a point and he had scored 12 goals in 19 appearances.

A Geordie, on his return from Cyprus he joined Bridlington Town in the Northern Counties East League (13 goals in 15 appearances), before Professional Players’ Union boss Gordon Taylor recommended him to Tommy Connolly.

After his single Oriel Park season he headed for New Zealand, playing with Mount Wellington, one of the country’s leading clubs, helping them to the League Championship for the 1986 season. He was capped for the New Zealand International team (the ‘All Whites’) in June 1988 against Saudi Arabia, scoring his first international goal a few days later in the second of back-to-back matches against the same opposition.

Before the end of 1988 he had further caps against Australia and for the following season, after 4 years with Wellington, he headed for Australia. Apart from a stint with Miramar Rangers back in New Zealand, for the next 15 seasons he was Australia based, while continuing to play at international level with the All Whites. Before his career closed he had made 26 All White Representative appearances, of which 15 (9 goals) are recognised as ‘A’ Internationals.

He became the third former Dundalk player to play at full International level with New Zealand, following in the footsteps of Tommy McCabe (5 caps 1958) and Sean Byrne (5 caps 1984-85).