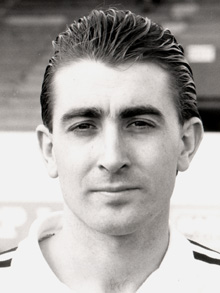 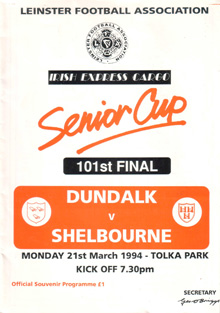 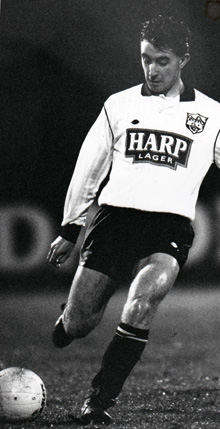 Right winger Mick Kavanagh, a UCD graduate with an economics degree, played with UCD for five seasons until Turlough O’Connor enticed him to Oriel Park in the summer of 1990. He had made a total of 98 League appearances with the College team and in his last season his six goals had topped their League goals chart.

Success came fairly quickly, but not before some last day heroics in Cork. Mick had broken into the team after the departure of Tony Cousins and he became an ever-present for the last 27 Championship games. He experienced just one defeat in this spell—a 2-0 December end loss at Oriel to Sligo Rovers.

Shortly into the 1992-93 season Mick left and ended up with Ards in the Irish League, joining at the same time as Dave Connell. A club record 15-match unbeaten spell sparked a mid-season revival but the year’s highlights came in the Irish Cup, terminating in a three-game marathon final, with local rivals Bangor edging the second replay 1-0. [Ards record 20(15)3gls]

After a short spell with Limerick in 1993-94, Mick returned to Oriel Park for the beginning of the 1994-95 season but after a couple of games he transferred to Division One Home Farm.

His last National League season (1995-96) was with Monaghan United, stranded in last spot in Division One. At this stage Mick’s work commitments with his employer, Irish Nationwide, prompted a return to junior football.

He made one last playing visit to Oriel Park in January 1997 for an FAI Cup replay match with Whitehall Rangers when Joe Gallen’s hat-trick ended the non-league side’s Cup dreams after a scoreless first round game.