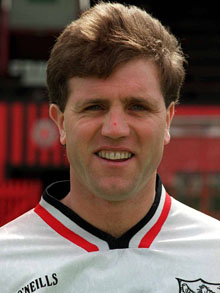 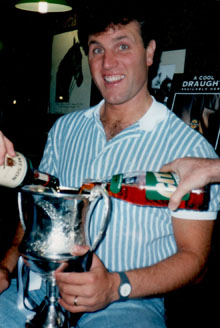 But he passed up on an offer to go to Wolverhampton Wanderers in exchange for a UCD scholarship, giving him the opportunity to continue with his football career. He made his League of Ireland debut with UCD in September 1981, losing 2-0 against Dundalk at Oriel Park.

He captained the Irish Youths squad at the 1982 UEFA Championship Finals in Finland but his major reward during his UCD venture was as a member of the 1984 FAI Cup-winning team, after Cup invincibles Shamrock Rovers had been shocked 2-0 in the final.

And the ultimate vindication of the policies of UCD chief Tony O’Neill was that the scorer’s of both UCD goals were on Soccer Scholarships—Joe and Ken O’Doherty—and both graduated in that same year.

To round out an outstanding year he was selected PFAI Young Player of the Year, and received Inter-League and Under-21 representative honours during that season.

Joe’s extra bonus was a £40,000 transfer to Manchester United and after twelve months at Old Trafford it appeared that he was close to a first team place after being included in the panel for an end-season Far East tour and a pre-season tour of the Netherlands.

But after a change of management—Alex Ferguson coming in for the sacked Ron Atkinson—Joe saw his opportunities squeezed and sought to leave. United slapped a big transfer fee on his head which discouraged some interested clubs and in frustration he returned home in 1987.

For a fee estimated to be between £15,000 and £20,000 he joined Shamrock Rovers, scoring on his debut against Derry City in October 1987. His Rovers form drew more cross channel interest but a likely move to Sunderland was thwarted as a result of contractual restraints with Manchester United.

Joe ended up joining his younger brother Peter at Limerick under Billy Hamilton, helping them to a third place League finish in 1988-89 but the departure of Hamilton was Joe’s cue to make his own exit and in the summer of 1990 he found himself with Derry City, while brother Peter headed for Dundalk and a Championship medal.

Under Jim McLaughlin in his first Brandywell season, an otherwise dismal season was brightened with victory in the League Cup, when Joe’s tenth minute goal in the final set the scene for a 2-0 win over his old club Limerick. For his second Derry season, new boss Irish League legend Roy Coyle brought a second place Championship finish and delivered another League Cup.

Joining his brother Peter at Dundalk in the summer of 1992, Turlough O’Connor’s last Oriel Park season came agonisingly close to greatness—an undefeated home League record, a single point behind the Championship triple-tied Cork, Shelbourne and Bohemians and runner up to Shelbourne in the FAI Cup final.

Finally under Dermot Keely, and against all the odds, Joe got his hands on a League Championship winner’s medal in 1994-95. Defeats in the finals of the League Cup and Leinster Cup, and a financial crisis that raised serious question marks about the club’s ability to survive, were the preludes to a nail-biting League victory that came down to the last day fixtures.

The European Cup games against Malmo were the highlights of Joe’s remaining two Oriel Park seasons. After another season under Turlough O’Connor at Bohemians, Joe closed his League of Ireland career in the First Division with Monaghan United under Billy Bagster in the 1998-99 season. Now in his 35th year, by this time he had clocked up almost 400 League games alone, in 18 League seasons.

Apart from Peter he had two other brothers who played League of Ireland football, Gary and Dave, and his father played hurling with County Limerick.