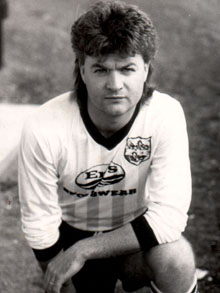 Paddy Joyce played with Cambridge Youths on the same team as Gino Lawless and Pat Nolan and were all three invited by their coach, Dundalk 1950s Cup hero Leo McDonagh, to go to Oriel Park—but the trio signed for Bohemians. However, in time they would all play for Dundalk.

Paddy had Youth caps, and was regularly on the score sheet in his three seasons with Bohemians. His 9 goals in 1978-79 was sufficient to earn his place on the Irish Amateur team for the Olympics Qualifying games against Norway in May 1979. After a scoreless draw in the home leg, Paddy’s 61st minute goal in the away tie put Ireland within half an hour of qualifying but two late goals for the home team earned the qualification rights to the Moscow Olympics.

Paddy’s 10 goals in 1979-80 saw him League Topscorer at Dalymount. The closest he came to success with Bohs was that second place league finish to Dundalk in their 1978-79 Double season.

Nor was there any joy in a move to Shelbourne for 1981-82. Although Paddy continued to get his share of goals, the Reds were in the doldrums at this stage and a move to Dundalk under Turlough O’Connor after four Shelbourne years promised a change of fortunes.

Renewing his strike partnership with Roddy Collins from his Bohemians days, he made a bright start to his Dundalk career with two goals in a pre-season match against Cliftonville. But after a barren spell he lost his place to the in-form Dessie Gorman. Restored early in the League campaign, a November hat-trick in Waterford turned out to be a false dawn and he spent most of the rest of the year with the reserves.

He had a regular first team slot during his second season at Oriel Park as Dundalk finished League runners up, a long way behind Shamrock Rovers, and falling to the same opposition in the FAI Cup final.

Paddy failed to make the Cup final starting line-up and moved back to Shelbourne for Dundalk’s Double-winning 1987-88 year. He started the 1988-89 year with Shamrock Rovers, finishing it with the demoted Waterford and closed his League career with the Suirsiders in the following year.

His 68 League goals were spread across five clubs and he scored in each of his twelve League seasons.