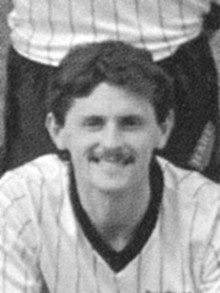 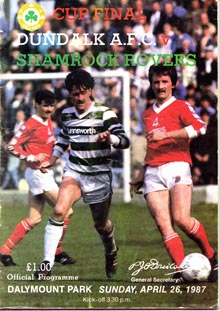 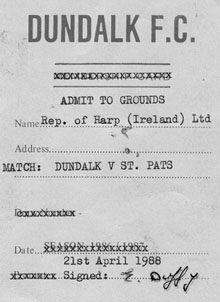 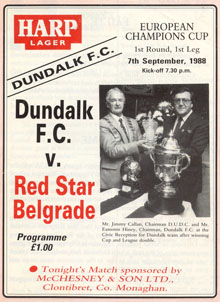 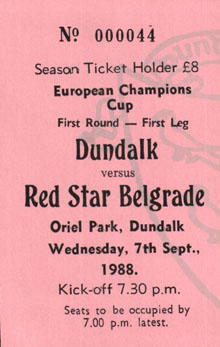 Playing with the Dundrum-based Beaumont Schoolboys team, just down the road from Milltown, it was no surprise that Shamrock Rovers was Larry Wyse’s first senior club. Under Sean Thomas he had collected his first competition honour when the Hoops defeated Sligo Rovers in the final of the 1976-77 League Cup.

But the appointment of Johnny Giles as manager and the arrival of a clutch of experienced players like Eamonn Dunphy and Paddy Mulligan, saw the Milltown departure of Larry after two months of the new regime.

Shortly after Sean Thomas was appointed manager of Athlone Town, in October 1977, Larry was one of several ex-Rovers to head for the Midlands. Harry McCue would take the same route. For the next two seasons Athlone filled their usual middle of the table role, but the arrival of Turlough O’Connor in the summer of 1979 changed everything.

An opening season 8-wins-on-the-trot delivered the Tyler All-Ireland Cup, after victories over Coleraine, Linfield, Shamrock Rovers and Drogheda in the two-legged final, with Larry pitching in three goals during the campaign. Before the season ended there was more silverware at St Mel’s Park—the League Cup—and there was also a runner up spot in the Leinster Cup and a third place League finish, the highest in the club’s history.

It got better the following year with Athlone’s first Championship pennant leading to Larry’s first European experience when Athlone gave an outstanding performance in the Champions Cup, losing out to KB Copenhagen on away goals after two drawn games and a 3-3 aggregate.

He spent the next two years with Bohemians, but like the rest of the League teams, they were left in the slipstream of the Jim McLaughlin-bossed Shamrock Rovers, en route to four successive League Championships. By the time he got a surprise call from Turlough O’Connor to join him again at Dundalk for the 1986-87 season, he had added a League runner-up award to his growing honours collection for Boh’s second spot in 1984-85.

Coming to Oriel Park with Terry Eviston, they joined a growing colony of ex-Athlone players—already there were Roddy Collins, Joey Malone and Harry McCue—completing O’Connor’s panel for a major assault on the top honours.

His second odyssey under Turlough O’Connor was as productive as his first. Part of a midfield combination hailed by their many supporters as the best ever to represent the club, he had Martin Murray and Barry Kehoe as his partners and this trio played key roles in all the highlights from this era—the 3-match FAI Cup semi-final victory over Bohemians in 1986-87, the many memorable games during the League-Cup Double victory in 1987-88, European matches against Ajax, Red Star Belgrade and Wettingen, a League runner up finish in 1988-89 and two more League Cup awards, bringing his count of League Cup winners medals to six.

He played a central role in the 1-0 1988 FAI Cup final victory over Derry City, securing the penalty kick in the 20th minute, converted by John Cleary, and with Kehoe and Murray, dominated the midfield area as Dundalk contained all of Derry’s efforts and completed the Double.

After four highly successful Oriel Park seasons, Larry accepted an offer from Joey Malone, newly appointed manager of Galway United, to spend his fifteenth League season (1990-91) with his fifth club. What he didn’t bargain for was another FAI Cup winner’s medal.

While Dundalk were claiming another League Championship under Turlough O’Connor, Galway had recovered from a dreadful start—seven losses in their opening nine matches—to dispel relegation fears by early March and to sweep through the FAI Cup campaign to a final berth at Lansdowne Road against the Cup aristocrats Shamrock Rovers.

Carrying an injury and cleared to play in the final only after a 45-minute pre-match work-out, he ensured that Galway matched Rovers in the vital midfield sector. A late winner from Johnny Glynn gave the Westerners their first major success and Larry pocketed his second FAI winner’s medal.

Early in the following year when Galway drew Odense in the Cup Winner’s Cup he made his sixteenth European appearance—Athlone 4, Bohemians 4, Dundalk 6 and Galway 2—spread across three competitions (Champions Cup 6, UEFA Cup 6 and Cup Winner’s Cup 4).

His last and 17th league season was spent back at Athlone Town, now in the First Division and under the management of Turlough O’Connor’s brother Micheal. When he scored his lone League goal in late March against Kilkenny City he was maintaining a remarkable record of scoring in each of his seventeen League of Ireland seasons.

Twice the recipient of the Soccer Writers Player of the Month Award: his first in September 1983, while with Athlone Town, and his Dundalk honour came in January 1989.

When he turned his hand to the management game he had one special moment when with Leinster Senior League Glenmore Celtic he delivered the Intermediate Cup in 1997, on the 50th anniversary of the club’s foundation, defeating Cork club Everton in the Turner’s Cross final.

When nominated in 1978 for the Sunday Independent’s Most Improved Player Award, he was described as “…has two good feet…wants to play for 90 minutes…is not selfish…has good vision…knows when to go forward and have a crack at goal and when to cover back.”