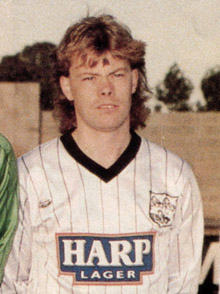 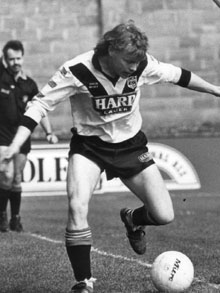 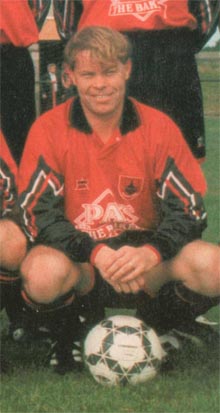 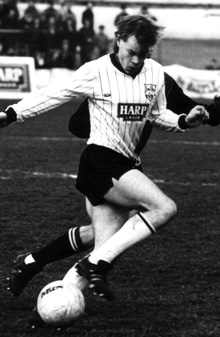 As a schoolboy Paul Newe was an accomplished athlete over 400 and 800 metres. He was sixteen before deciding to concentrate on football and while playing with Greenhills he was invited by Shelbourne manager Johnny Byrne to join the Reds, making his debut at the beginning of the 1982-83 year.

On a team that was always among the also-rans he proved a capable striker, being joint leading goalscorer with Shels in 1984-85 and heading the list the following year. But a 12th position in 1984-85, just avoiding the trapdoor into the newly formed First Division, was a sign of things to come.

When the Reds went down the following year there was a change of management and Paul accepted an invite from Brian Kerr, who had been involved with Greenhills, to go to Drogheda. Brian was then assistant manager to Drogheda boss Mick Lawlor. Drogheda’s third place finish in the second year of the First Division wasn’t good enough but Paul’s leading League scorer’s haul of 12 goals caught the eye of Turlough O’Connor and for the 1987-88 season he was at Oriel Park.

In a squad bristling with talent and experience you had to earn your place and the arrival of Michael O’Connor in late October increased the competition for a starting slot. Paul’s contribution in a 14-man squad was dotted throughout the historic League-Cup Double campaigns. Although he did not play in the Cup final, his goal in the first round replay against Sligo Rovers and setting up Terry Eviston for another was a man-of –the match performance as was his display in the next round against Bray.

The following year (1988-89) he was a more consistent starter and his 9 League goals gave him another leading marksman award. While there were no winner’s trophies—just two runners up, both to Derry City in League and League Cup—Paul’s performance earned him the Supporters’ Player of the Year Award.

For 1989-90 he shared the goalscoring duties with Tony Cousins, starting in all but two League games. At the end of his third season there were some major departures from Oriel Park—Paul was one of them, convinced by Shelbourne manager Pat Byrne that the Reds were ready to step up to the plate.

Scoring four goals against Dundalk at Oriel Park in the first League match of the 1990-91 season seemed to endorse this decision but come the season end Turlough O’Connor was celebrating another League Championship victory while for Shels and others it was back to the drawing board.Shelbourne didn’t have to wait long and the signing of Garry Haylock and Mark Rutherford for the 1991-92 year meant that Paul was surplus to their requirements.

While the Reds were claiming their first title in 30 years, Paul was with First Division Cobh Ramblers engaged in a dog fight for the second promotion slot, behind the Sam Allardyce-managed Limerick. His 9 goals earned him another club best but Waterford nicked the second promotion spot by a single point margin.

His last full League season was spent at First Division Longford, where he collected his eighth club marksman award and increased his career League goals to 103. After five games with Limerick in the 1996-97 year he finally called a halt.

The leading story on the opening day of the 1990-91 League was reserved for Shelbourne’s newly arrived striker Paul Newe. Under a banner headline that read ‘Oriel Park BLITZED’ the Irish Press continued: “Paul Newe made a sensational first visit to Oriel Park after his surprise summer departure with a four-goal salvo inspiring a remarkable Shelbourne second half performance.”