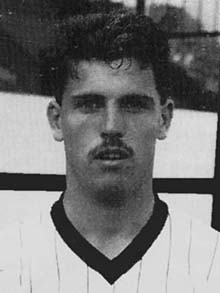 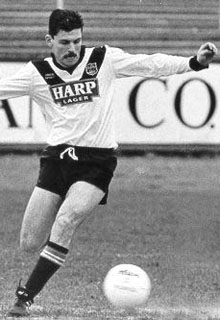 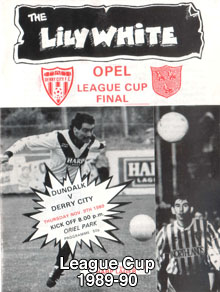 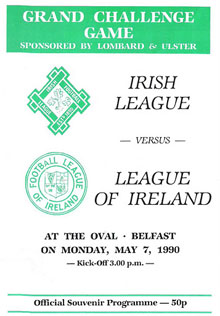 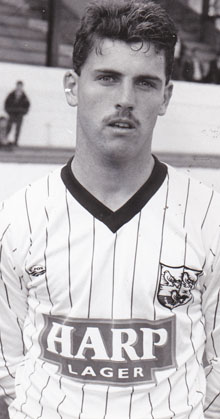 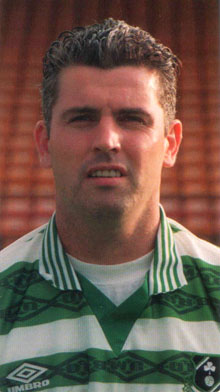 Schoolboy and Youth International appearances while with Home Farm were the shop windows that brought Tony Cousins to the attention of English League clubs and he was 16 years old when he joined the Chelsea Academy. Other Dublin players, John Coady and Pat Fenlon, took the same route.

Shortly after a European Youths International against Finland in May 1988 he moved to Middlesbrough, but that was very short-lived and the following August Turlough O’Connor beat a posse of managers for his signature after he returned home. O’Connor was beefing up his Double-winning squad having lost Harry McCue and Michael O’Connor, both emigrating to Australia.

With Dessie Gorman and Paul Newe getting regularly on the score sheet, Tony’s first season opportunities were limited, but when the opportunities came he certainly grabbed them. In the last three league games, all away from home, Tony scored five goals including a hat-trick against Limerick.

The departure of Dessie Gorman gave Tony a clear run in the 1989-90 year and in his 42 starts he found the net 18 times. He also made up for his disappointment at losing the League Cup to Derry City in the previous year, defeating the same opposition on penalties in the 1989-90 final.

His performances earned him a share of the PFAI Young Player of the Year with Vinny Arkins (Shamrock Rovers) and his first Under 21 Cap, when he came on as a substitute and scored in an Oriel Park friendly against Malta in April 1990. He followed up with two League of Ireland caps, scoring in both games, first against the Irish League in May and then the Australian Olympic XI in August.

A continuation of this form at the beginning of the 1990-91 year—four goals in the Leinster Cup season opener against Longford followed by three goals in the opening four League games—had a batch of scouts nosing around. After a trial with Liverpool—scoring with the Reserves and setting up another—Kenny Dalglish paid £50,000 for his signature in September.

He spent three seasons at Anfield and got plenty of Reserve and A team football, but he was plagued by a spate of injuries, restricting his opportunities. While he accumulated four Under 21 caps while at Liverpool, in February 1992 he had to withdraw from a ‘B’ International against Denmark. His only League experience came with Third Division Hereford United, where he played three games while on loan in November 1992.

He was finally released by Liverpool in May 1993, causing a stampede among a number of Irish clubs, including a couple from the Irish League, and he eventually signed with Bohemians. But although he continued to knock in the goals, at that time Bohs were not much better than average and their best finish during his three Dalymount seasons was a runner-up slot in 1995-96.

With Derek Swan having taken over the role of club topscorer, Tony moved to Bohs great city rivals Shamrock Rovers where in his first season, 1996-97, he shared the League Topscorer honour with Shelbourne’s Stephen Geoghegan with 16 goals each and was voted Rovers Player of the Year. A year later with 15 League strikes he was in second spot.

But like Bohs, the Hoops were in the doldrums and apart from a Leinster Cup win in 1997, Rovers only success in Tony’s six seasons was the FAI Super Cup in 1998. With Rovers he made 190 appearances in all competitions and scored 65 goals. He retired after a final season with Bray Wanderers (2002-03).

He immediately moved into management, being appointed to lead the Under-21 squad at Shamrock Rovers, before becoming assistant to Liam Buckley in 2003. Drogheda recruited him to fill the role of Paul Doolin’s assistant for the 2005 year and in 2006 he moved on to his first full management appointment at Galway.