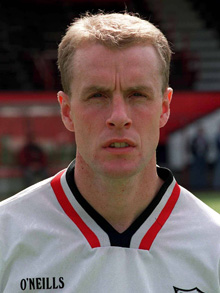 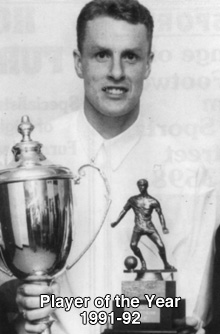 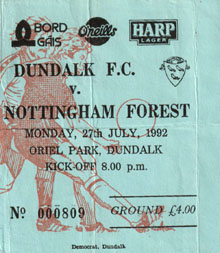 Amongst the candidates for membership of Dundalk’s Hall of Fame there is no shortage of central defenders or just plain old-fashioned centre halves—most of them teak tough and made of granite. But ask any Dundalk supporter to nominate just one of them on a team that is going to war and you can be sure that James Coll will feature high on the list.

Born in the Glasgow Gorbals, his father was from Donegal and James was a regular summer visitor before the family decided to return permanently to Ireland. He spent a while in Dundalk playing for the reserves for three months in early 1984 before he found work in Tallaght, where he played with the local junior team.

Turlough O’Connor signed him for Athlone Town in 1984 and after his appointment as Dundalk manager a year later he tried to bring Coll with him but Athlone’s demands were too high. At the end of his Athlone spell he spent periods with St Patrick’s Athletic and with Limerick, before linking up again with O’Connor in 1989, replacing Jim Gannon.

The return of Tom McNulty from his Finn Harps sojourn added extra steel to the remnants of the 1987-88 League-Cup Double winning team and although there was no 1989-90 successes in the major trophies, the League Cup and Presidents Cup ended up at Oriel Park.

The addition of Ronnie Murphy a year later completed the rock-solid defence on which Championship-winning teams are founded. Martin Lawlor, Dave Mackey, along with Coll, McNulty and Murphy formed an impregnable fortress in front of Alan O’Neill.

An undefeated 16-game run from the end of December, conceding just four goals, concluded in a last-day classic decider in Cork, when Coll and Murphy dominated the renowned home strikers, Pat Morley and John Caulfield, and Tom McNulty provided the winner for Dundalk’s eighth and O’Connor’s second Championship pennant. James was one of four Dundalk players selected on the All-Star LOI team for the season.

The unbeaten 1990-91 run, lasting 16 games, was extended further at the beginning of the following year to a record-breaking 22, during which a total of eight goals were conceded.

Coll’s great form continued into that season, when he was the recipient of the Dundalk Supporters Player of the Year Award. The 1994-95 season, under new manager Dermot Keely, and with a new defensive set-up, opened disastrously with a single point from the first three League games.

But the back three—Coll, Anto Whelan and Mick Doohan—quickly settled into Keely’s scheme and after some last day heroics at Oriel Park, captain James Coll was collecting the Championship Pennant and was later honoured by his selection to the PFAI Team of the Season.

He was not however offered terms for the following season and Turlough O’Connor again moved in, enticing him to Bohemians. He stayed for a number of seasons, collecting two league runners up awards at Dalymount until a broken leg ended his Premier League career.

His playing career ended during the 1998-99 season, player-managing at Athlone Town for a short while, and finally calling a halt after a couple of games with Monaghan United. He still keeps an eye out for the Dundalk results and maintains his football interests through coaching at NUI Maynooth.

While he was with Athlone Town he was a member of the League of Ireland squad, under Bohemian’s manager Billy Young and captained by Dundalk’s Joey Malone, that travelled to Baghdad in May 1986 to play the Iraq national team for their final warm-up game before the Mexico World Cup finals.

On the birthday of the attending dictator Saddam Hussein and played in sweltering heat before a hostile 100,000 crowd, the Irish team were defeated 1-0, narrowly missing out on a famous draw when Tommy Gaynor’s goal was disallowed for off-side. In honour of the occasion, the squad were the guests of the FAI at Ireland’s November 2008 fixture against Poland.

In 1993 he was capped three times for the League of Ireland, all high-profile games against leading English League teams—Leeds United, Blackburn Rovers and Liverpool.

His most recent visit to Oriel Park was in November 2009 when he lined out with the Dundalk Legends in their 2-1 victory over Manchester United Legends. His back four partners that day were Tommy McConville, Martin Lawlor and Joey Malone—what a quartet.

Philip Quinn (Irish Independent) writing in the Dundalk programme for the 1995 FAI Quarter final tie against Derry City: “Norman Hunter bites legs, Vinnie Jones bites noses and a snarl from James Coll is usually enough to send goose pimples shooting up and down the necks of National League centre-forwards. Carved from granite, the Scot is the sort of guy who would not flinch if ordered to spearhead the charge at Bannockburn. He is the National League equivalent of a Sherman tank.” And so say all of us!