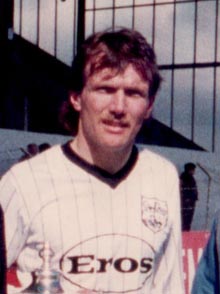 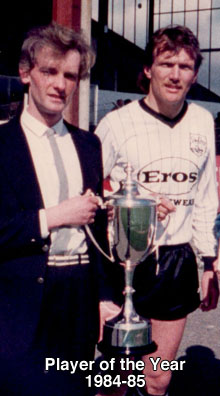 In dispute with St Patrick’s Athletic, for whom he had played for three seasons, utility defender Mick Wright drifted away from Inchicore. He ended up in the Leinster League for the 1981-82 year with Malahide Utd.

Dundalk’s assistant manager Mick Leech had known him when he himself was with St Pats and aware that Dundalk needed to strengthen its pool of defenders, recommended him to Jim McLaughlin.

Mick made his Dundalk debut in a League Cup defeat of Drogheda, scoring in the 7-2 victory. Activity in his first season was shared between the reserves and first team bench duty. A late season injury to Paddy Dunning opened the way for an extended run and from mid-February he was a first team regular.

The exit of Dunning and Eamon Gregg at the end of the season after the departure of Jim McLaughlin to Shamrock Rovers, cleared the way for Mick and for the following two seasons he was one of the first names on every teamsheet. At the end of the 1983-84 term Drogheda made an offer to exchange him for Martin Murray, but Tommy Connolly got the better of the dealings, retaining Wright and landing Murray.

Mick was in top form during the 1984-85 year and it was no surprise when he was announced as the clear winner of the Supporters’ Player of the Year Award. But a couple of months later, following the appointment of Turlough O’Connor as Dundalk manager, Mick was on his way to Drogheda, in exchange for Roddy Collins with Dundalk getting £1,500 into the bargain.

Turlough’s need of a striker was clearly greater than that of a defender and the cash exchange came in useful as he expanded his first Oriel Park squad. And within a few months of the new season Collins was signed by Mansfield Town for £15,000!

Drogheda had been relegated to the new Division One, but there cause was not helped by off-the-field disputes between different sets of supporters and by an ever-changing management scene. But Mick continued to perform at the heart of their defence and at the end of his second term was the recipient of another Player of the Year Award.

However, there appeared to be a jinx where such awards were concerned and before the new season opened Mick was with another club, throwing in his lot with Waterford, now a pale shadow of the club that had dominated the League of Ireland scene in the 1960s and early 1970s.

Mick lasted two years on Suirside, leaving after Waterford were relegated at the end of the 1988-89 term, but it got no better at his next port of call, Athlone Town, whose glory days were also fast receding and who in each of his two seasons finished in tenth spot, just avoiding the drop to Division One.

He closed his career with a further two years at Division One Monaghan, finishing on a note of celebration with the Mons first ever promotion to the Premier Division, when Mick Byrne and Noel Melvin supplied the goals in a play-off with one of Mick’s old clubs, Waterford. This brought his 13-season League career to 300 games with six clubs.

While he was with St Patrick’s Athletic his honours included an FAI Cup runner up award, being on the losing side of the 1980 Cup final against Waterford.