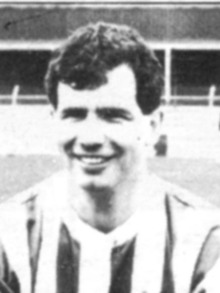 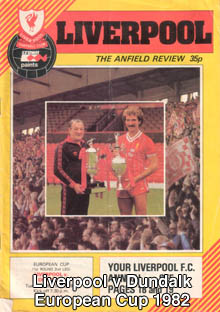 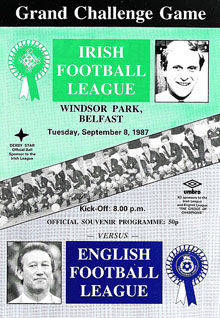 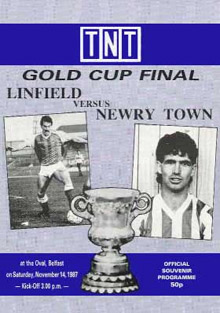 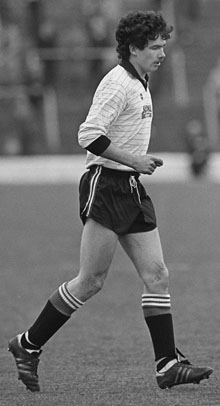 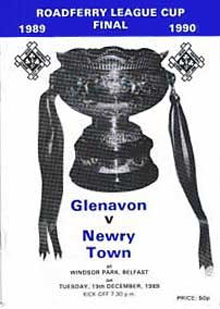 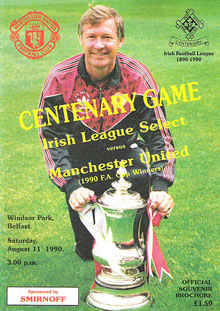 Ollie Ralph is a member of one of Dundalk’s most celebrated ‘Soccer’ families. His grandfather, John Ralph, was a prominent player, official and referee in the post-World War 1 period.

His father, Joe, is a Dundalk Hall-of-Famer, who was one of the League of Ireland’s most outstanding full backs throughout the 1950s and earned Inter League caps with the LOI. A one-club player, in 11 seasons from 1949-50 he made 322 club appearances and was on both of Dundalk’s FAI Cup victories in the 1950s.

He made a sensational start to his Dundalk career, scoring a hat-trick on his debut against Bohemians in the Leinster Senior Cup in Nov 1981, when an untried Dundalk team, containing half a dozen players with little experience of senior football provided the shock of the tournament.

Before the end of the month he had made his League debut and by the season’s end he had a League Championship medal, after making 11 League appearances (+3 as sub).

Ollie missed all the celebrations after suffering a serious jaw injury in a 4-match marathon against Bohemians in the semi-final of the FAI Cup—an injury that at one stage threatened to finish his career.

For his second club season he competed for a first team place with John Archbold, coming on as a substitute in both legs of the European Cup tie against Liverpool. He made the starting line up in the final of the League Cup, securing the Dundalk goal in a 2-1 defeat to Athlone Town.

When Newry gained re-admission to the Irish League in 1983 after a 43 year absence, they looked south for experienced players to galvanize their squad.

Ollie was one such player and he made his Newry debut as a substitute in a glamour friendly match against Shamrock Rovers, arranged to herald the club's elevation back to senior football, and for the next fifteen seasons remained among the most prolific goal scorers in the local game.

In those early days Newry were regularly among the bottom clubs in the Irish League, but Ralph settled quickly and, though normally wearing the number six shirt, was more-often-than-not the club's top scorer.

By the late-eighties Newry had begun to assert themselves in the top-half of the League, and in the 1987/88 season they reached their first major finals as well as finishing fourth in the League – their highest position of the modern era.

The hectic month of November 1987 brought an appearance in the Gold Cup Final at the Oval, where they lost 3-0 to Linfield, and eleven days later they were back in East Belfast to face Ballymena in the Co. Antrim Shield. This time, in front of just 1,000 people who had made their way through the disruptions of city centre bomb scares, Newry triumphed 2-1.

In the 1988/89 season Newry suffered something of a slump in form, finishing in the bottom tier of the League and having to make do with the consolation of Mid-Ulster Cup runners-up medals after a 1-0 final defeat by Glenavon.

Ralph however had his most prolific season to date, finding the net 37 times in all competitions to finish as Northern Ireland football's top scorer. It was just a sign of things to come.

He once again topped the local scoring charts, claimed a Mid-Ulster Cup winner's medal and played in the finals of the Roadferry League Cup and of the inaugural Guinness Six-a-Side Tournament.

Most notable among his 42 goals that season was a League hat trick against Glenavon, another hat trick in the Mid-Ulster Cup Final 4-0 win over Banbridge Town and a four goal haul against Ballymoney United in the League Cup.

He also finished topscorer in the Guinness Tournament with six goals, including two in the final, a 2-2 draw with Linfield, before Newry lost out on penalties.

Further reward for Ralph's efforts through the 1989/90 season came in the form of Irish League representative honours, and he played in a 1-0 inter-league defeat by the League of Ireland in May 1990 and in the 3-0 Centenary Game defeat by Manchester United the following August.

By then he was well past thirty, and many talked of an Indian summer to his career – summer was to stretch well into autumn.

Through the early nineties Ralph continued to score regularly and Newry continued to challenge for honours. In 1990/91 they lost out in a stonking Co. Antrim Shield Final, 4-3 to Glenavon having been 3-0 and 4-1 down.

In 1992/93 Newry once again lost out in the McEwans Soccer Sixes Final and suffered a 2-1 defeat in the Mid-Ulster Cup Final defeat by Portadown.

However, the club's League form had slipped, and with the Irish League's reorganisation in 1995, Newry found themselves placed in the First Division. Ralph was appointed assistant-manager during the 1994/95 campaign while continuing as a regular in the starting eleven.

At first Newry struggled to adapt to their new League, as did Ralph, and he scored just three goals as the club finished rock-bottom in the First Division's first season.

The following season things improved slightly, but the team was still struggling for goals, Ralph scoring four in the League as Newry finished fifth.

In December 1996, following the quick fire departures of Peter Watson and Matt Bradley, Ralph was appointed joint manager, along with another veteran player, Harry Fay.

The pair began to turn around the fortunes of the team, and in 1997/98 led Newry to the First Division title and into the Irish Premier League, the management team making just a handful of appearances between them. Ralph, at the age of forty, hung up his boots with a total of 267 senior goals to his name.

In March 1999, despite having led Newry to mid-table security, Ralph and Fay left the Showgrounds – both struggling to combine football management with their day-to-day employment.

Ralph became assistant-manager back at Dundalk, first with Terry Eviston and later with Martin Murray, sharing in the successes in the First Division (2000-01) and FAI Cup (2001-02).

After a spell as caretaker manager in October 2002 he seemed likely to take the role permanently, only to lose out to Trevor Anderson. Instead Ralph returned to manage Newry, then bottom of the Premier League, for a second time.

The team never rose off the foot of the table, only retaining their top-flight status thanks to a play-off win over Bangor and the expansion of the Premier League to sixteen teams. In December 2003, with the team's form barely improved on the previous campaign, Ralph resigned from the Newry hot-seat.

He would return to the Showgrounds twice more, firstly as a member of Paul Miller's backroom staff in January 2006 and again a year later as caretaker manager following the departure of Roy Coyle.

During his period as Dundalk’s assistant manager to Terry Eviston in the 1999-00 season he made one last club appearance, coming off the bench in a trip to Cobh for a League match.