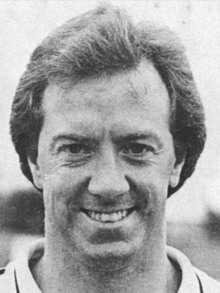 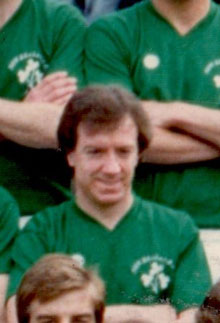 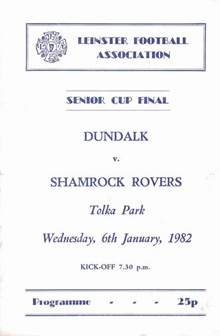 It was no surprise that right full-back Eamonn Gregg started his senior career with Shamrock Rovers— the Gregg name is synonymous with Shamrock Rovers. Two of his great uncles were founder members of the club in the early century and his uncle Podge won the FAI Cup with Rovers in 1945. His brother Jimmy also played for Rovers in the 1970s and Podge's son in law Mick Gannon won the FAI Cup with Rovers in 1978.

His first team debut, under Billy Young, came early in the 1971-72 season and his first senior competition honour came at the beginning of the 1972-73 season in the President’s Cup in a 3-1 victory over Dundalk, when his brother Jimmy was his full-back partner.

But after a couple of seasons at Milltown Eamonn moved to Bohemians, now bossed by Billy Young, and his stay at Dalymount coincided with the club’s most successful period when under Young they vied with Jim McLaughlin’s Dundalk for the title of Team of the Seventies. And it was a close run race.

Eamonn shared in the Boh’s successes in the League (1974-75 and 1977-78), the FAI Cup (1976) and the League Cup ( 1975 and 1979). Inter-League appearances and an Under-23 cap (1973) followed and then in April 1978 he earned a full cap against Poland. An outstanding display on his debut ensured further International honours and over the following 18 months he added another seven International appearances.

At the beginning of the 1980-81 season, after eight seasons with Bohs, he requested a transfer and after a number of failed attempts he and Eddie Byrne of Shamrock Rovers signed for German third division club Lubeck, an ambitious semi-professional club, striving for a place in the Bundeslaga. But the deal announced in early December ran into a series of financial and regulatory hitches and did not materialise until mid-March when there were only a handful of games left.

At the end of the season Eamonn returned home and Jim McLaughlin, after losing Dermot Keely to Glentoran, moved quickly. With a bit of retooling at the back—Tommy McConville and Paddy Dunning in the middle with Gregg and Martin Lawlor on the flanks—McLaughlin tied up another League Championship and Eamonn, a League ever-present, now had three Championship medals in his collection.

He was on the League of Ireland squad under Jim McLaughlin’s management that travelled to New Zealand in May 1982 for a 5-match itinerary against the local National team in their preparation for the World Cup. Gregg played in four of the games and according to McLaughlin’s reportage on his return home “Eamonn had a great tour”.

After another Oriel Park season, he was one of a significant number who left Oriel Park following the departure of Jim McLaughlin. He moved to St Patrick’s Athletic and except for a short loan spell with Shamrock Rovers in 1987-88, he spent a total of six seasons at Inchicore without success. St Pat’s only decent league showing in this period came when they were runners up to Dundalk in the 1987-88 year.

Eamonn spent his final playing season (1989-90) player-managing Kilkenny City and leading them to their best ever League finish, just two points behind the tied leaders Waterford and Sligo. This showing earned him the top spot with Bohemians, where he landed the FAI Cup in 1992 but he never recovered from the disappointment of the last hurdle League Championship loss in 1992-93, in the first instance courtesy of a last-day Tom McNulty special at Oriel Park and then in the marathon play-offs with Shelbourne and Cork.

The following December he left Bohemians and a month later was appointed manager of Shelbourne. But after a few months of the 1994-95 term he was replaced by Colin Murphy. Shelbourne fans reckoned he was Bohs through-and through and a man with black and red blood coursing through his veins!

He made 21 appearances in European competition, 15 with Bohemians and another 6 while at Oriel Park.