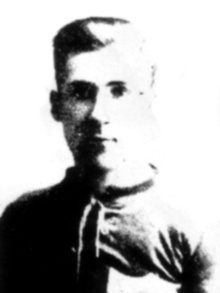 Like his brother Jimmy, Davy Nelson was born in Scotland but learned his football in Belfast. He came to prominence in the 1922-23 season with Crusaders, where he found an abundance of fullbacks and he switched allegiance first to St Marys and later to Claudy.

He tried his luck in England, spending a while with Cardiff City where he was a consistent performer with the reserves but returned to Ireland for the 1926-27 season, which he shared between Crusaders and Dundalk.

Before the season had ended his fullback partner was Gordon McDiarmid. He moved to Newry Town for the following year.

In 1932-33 he returned to Dundalk, linking up again with McDiarmid as his fullback partner for Dundalk’s first League Championship victory but after a dozen League games he sustained a broken wrist that kept him on the sideline until April. Injuries also prevented him taking his place in October on the League of Ireland team against the Welsh League. He later played with Shelbourne.

His brother Jimmy had 4 Scottish Caps and a distinguished English League career between 1921 and 1939, making a total of 461 League appearances with Cardiff City, Newcastle United and Southend United.

He was described as ‘Not of the tear-away type….puts brain before brawn…. ….never shirks a tackle….his style is more ‘thoughtful’ than ‘dashing’…”.