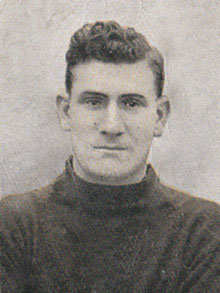 John was one of four goalkeeping brothers—brother Bert had one International cap—and they were related to the goalkeeping brothers Elisha and Billy Scott. He and Bert spent time together with Belfast Celtic, Bert winning an Irish League medal in 1915, but the arrival at Celtic Park of their cousin Elisha Scott saw both of them move on.

John’s stepping stone to first team football was membership of the successful Glentoran reserves in 1918-19, winning the Steel Cup, Intermediate League and runner up in the Intermediate Cup.

In the following season he was a member of the Glen’s team that was expelled from the Irish Cup for fielding an illegal player in the semi-final, while brother Bert’s team, Belfast Celtic, were also expelled following a cup-match riot.

After 87 appearances with Glentoran in four seasons (1918-19 to 1921-22) he took his chances in the English Leagues, but after a season with Oldham Athletic when he made no first team appearances he returned to Glentoran for the 1923-24 season. After receiving another Irish League cap in October 1923, by the following December he returned to the English League, signing with Third Division North New Brighton where he was under-study to brother Bert.

After making only 5 league appearances he made his last and most successful English League posting when he moved to Rotherham in January 1925 for a fee of £525.

In three seasons (1924-25 to 1926-27) first with Rotherham County and then with the reformed Rotherham United he made over 80 appearances in the Third Division North.

Manager Joe McCleery had no difficulty enticing John to Dundalk—his connection with the Mehaffys went back to their days in Lurgan when McCleery had introduced brother Bert to Belfast Celtic, back in 1914.

John made his Dundalk debut in May 1928 in the last match of the season and in the following year he played a major role in the club’s qualification for its first competition final, when losing the 1929 Leinster Senior Cup to Shamrock Rovers after a replay. He later played with Coleraine in the Irish League.