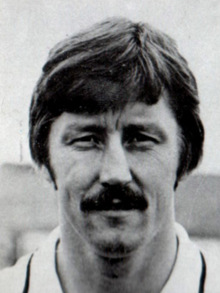 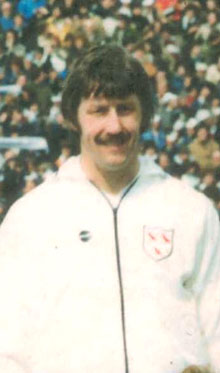 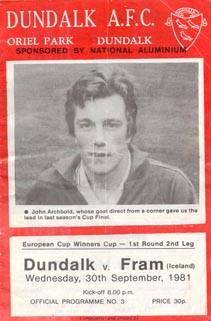 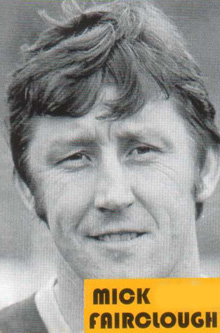 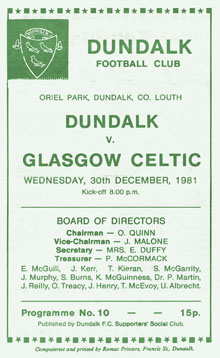 A scoring club debut is always a special occasion, but Mick Fairclough’s Milltown equaliser for Dundalk against Shamrock Rovers on March 2nd 1980 in a key League game was deserving of more than the normal celebrations—five years previously he had been advised by the club doctor at English League Huddersfield Town that his football career was finished.

In August 1971, while still awaiting the results of his Leaving certificate Examination, he had been transferred by his home-town club Drogheda United to First Division Huddersfield, after making just 22 club appearances. In his debut League of Ireland season his games included the FAI Cup final, when Limerick got the better of Drogheda after a replay. He had also been on the bench for Ireland’s Olympic qualifying game at Ballybofey against Yugoslavia and made a substitute appearance.

After a substitute appearance in an away fixture against Wolverhampton Wanderers, he made his home debut on New Year’s Day 1972 in a scoreless draw against Stoke City in front of a 12,000 crowd. Demoted in his first season, Huddersfield spent just one year in Division Two and went straight down to Division Three.

In four seasons, before injuries caught up with him, Mick made 39 appearances and scored four goals. The highlights of his stay at Leeds Road were scoring against the great Chelsea side of the early 1970s at Stamford Bridge and his two goals in an FA Cup match at Carlisle. He also made his first Irish Representative appearance in January 1972, scoring once with the FAI XI at Dalymount Park in a 3-0 victory over the German Olympic XI.

Two separate incidences, both involving tackles to the knee, finally ended his English League career, with the Huddersfield doctors recommending that he quit football for good.

Returning to Ireland in 1975, several years went by before Mick started to get treatment for his knee, travelling every fortnight for a year to Belfast, where he was treated by Bobby McGregor, the Northern Ireland and Glentoran physio. Eventually he started to play with CIE Drogheda in the Leinster Senior League, scoring plenty of goals. Jim McLaughlin heard about Mick’s exploits and in double quick time had signed him for Dundalk.

Two goals on his Dundalk reserve debut saw him on the bench for the crucial March 1980 League game against Shamrock Rovers with a EUFA Cup qualification on the line. Mick was introduced with 15 minutes remaining, scored his debut goal. He contributed four goals to an undefeated 7-match run to the end of the season securing the European qualification spot, a money-spinning tie against Oporto.

There was no looking back and over the following four seasons at Oriel Park he made up for his five years on the side-lines, collecting all the major trophies and scoring plenty of goals—he was club Topscorer for three successive years. In the 1981 FAI Cup semi-final, after a recurrence of his knee injury, he was cleared to play at the last minute and he scored the lone goal against Finn Harps, while in the final his superbly taken 79th minute goal, after a run from the halfway line, clinched victory in the cup final against Sligo Rovers.

During the European Cup Winner’s Cup in 1981, he scored goals in three successive ties: both legs against Fram Rekjavik and most memorably in the 1-1 home tie against Tottenham Hotspur. With less than 10 minutes remaining, receiving the ball from Martin Lawlor 30 yards out, he beat the centre-half, drew Ray Clements the Spurs keeper and then coolly slid the ball under the keeper’s diving body to an ecstastic Oriel Park.

The icing on Mick’s cake came in May 1982 when he was selected by Eoin Hand on the Irish panel for a three-match tour of South America and made two substitute appearances: in a 1-0 loss to Chile at Santiago and a final-match 2-1 loss to Trinidad and Tobago at Port of Spain.

After the departure of Jim McLaughlin, Mick stayed at Oriel Park for another year before returning to Drogheda, where his 9 League goals in 1984-85 was just one less than leading scorers, Roddy Collins and Pat Dillon, but it was all in vain—Drogheda were one of the four clubs who fell through the trap door into the new First Division.

For his final playing season he started with Drogheda, later helped Sligo Rovers in their successful quest for promotion from the First Division and closed the year and his career with a short Newry Town spell. Then 33 years of age and with his knee beginning to act up, Mick called it a day.

He maintained his football interests, coaching youth teams in the Drogheda area and when Jim McLaughlin managed Drogheda in the mid-1990s one of his first moves was to appoint Mick as coach to the youths’ squad. His son David had a successful League of Ireland career, earning Youth and Schoolboy International honours and playing with Drogheda and Bohemians.

After finishing his English League career Mick went back to college and went into the IT business. He spent over 20 years with IBM and became the European IT Manager for the IBM Software Group.

Jimmy Meagan in the Irish Press after Mick’s performance against Fram Rekjavik at Oriel Park in the 1981 European Cup Winners Cup second leg: “…fearless Mick Fairclough … used his speed and remarkable positional sense … scored a marvellous goal … beautifully executed by the master of a half chance.”