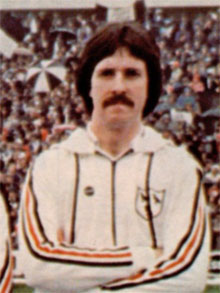 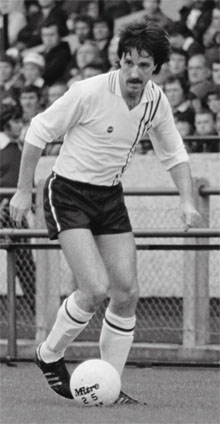 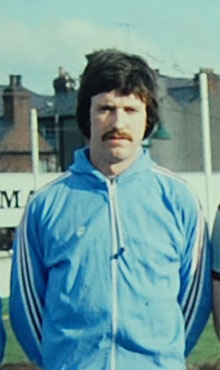 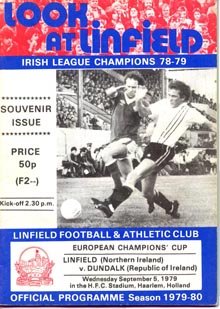 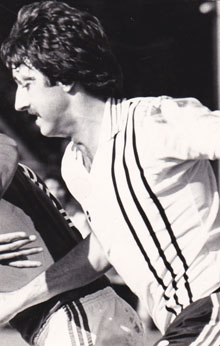 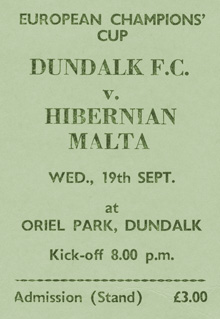 Local schoolboy teams Lisnawilly, Southend and Shamrocks was Cathal Muckian’s grounding before joining the Dundalk Youths squad under Gerry Gover. As a result of leaving Dundalk and starting to work with the Bank Of Ireland he abandoned football for a couple of years but after attending at the 1971 FAI Youth final between Drogheda and Shelbourne his interest was renewed. A successful trial with Drogheda followed.

Although he made his first team debut on New Year’s Day 1972 against Shelbourne at Tolka Park, for his first couple of seasons he was with the Drogheda Reserves. Excellent in the air, tall, fast and intelligent—he had the ingredients of a first class goalscorer. During the 1973-74 season he became a first team regular.

The closest that Drogheda came to success during this period was in the 1976 FAI Cup under the management of Northern Ireland legend Jimmy McAlinden. Cathal played a leading role in the Boynesiders’ qualification for their first final, particularly in the 4-match first round marathon against Cork Hibernians.

He scored in the first replay, was red-carded during the second replay and scored two goals in the deciding third replay. It was all in vain however as a Niall Shelly goal in the 81st minute settled the final in favour of Bohemians.

The 1977-78 season—his seventh club season—saw Cathal at the top of his form, scoring 21 League goals and propelling Drogheda to a third place League finish, equaling their best ever achieved in the previous year. Only Turlough O’Connor’s 24 goals with League Champs Bohemians topped Cathal’s 21.

His reward was selection by Johnny Giles to play for the Irish International team in a friendly against Poland in April 1978. He got his first League of Ireland cap a week later in Buenos Aires playing against the Argentine World Cup squad.

At this time Jim McLaughlin was building another Oriel Park team and by coincidence Cathal was appointed to the position of assistant manager at the Bank of Ireland’s Dundalk-based regional headquarters. For a fee of £4,000 Cathal returned to his home-town club, ten years after he had featured in the Dundalk Youth squad and he could not have chosen a better time.

Spearheading a new strike partnership with Hilary Carlyle, with a new midfield combination—lead by Leo Flanagan and Sean Byrne—and a re-tooled defence—McConville, Keely, Dunning, Lawlor—Jim McLaughlin was about to scale new heights and in the process scooped all the honours and the awards for Dundalk.

The biggest dividend was the League-FAI Cup Double and central to the season’s successes was the Muckian-Carlyle strike combination, with the pair contributing 30 goals.

In a red-hot spell from Christmas Eve to the end of January, Muckian recorded goals in seven League games on the trot, all wins, equaling Danny Hale’s 1966-67 feat.

Many of his Dundalk career highlights came in the following season’s European Cup campaign—a six-game odyssey that started with the nightmare that was Oriel Park for the late August first round tie against Linfield and concluded back on the Carrick Road with the bedlam of a 20,000 crowd in the early November third round second-leg tie against Glasgow Celtic.

The Muckian highlights included two goals in the second leg tie against Linfield in the calm of Haarlem, then initiating the move that led to Liam Devine’s winner against second round opponents Hibernians (Malta), and opening the Dundalk account in the 2-3 first leg tie at Celtic Park. With his three European campaign goals he shares with Mick Fairclough the leading Euro marksman table.

A hamstring injury incurred shortly after coming to Oriel Park was now compounded by a knee injury, leading to loss of pace, missing more games and a significant strike-rate decline. At the beginning of the following season he moved to Shamrock Rovers and later to Shelbourne. He was aged thirty during his last League of Ireland stint at Athlone Town under Turlough O’Connor in the 1981-82 season.

While his most goal-productive years were at Drogheda, where his League strike rate was a goal every second game, his two-seasons at Oriel Park were much more highlights-productive.

For supporters of Dundalk his partnership role with Hilary Carlyle in the hugely successful 1978-79 Double year and his contribution to the following year’s never-to-be-forgotten European Cup odyssey mark him among the Oriel Park legends.

During his two Oriel Park seasons he was capped five times with the League of Ireland that brought him to Italy, Switzerland, Malaysia and Singapore.

Irish Press Personality of the Week Sept 11 1979 "..the outstanding forward in the European Cup game against Linfield."