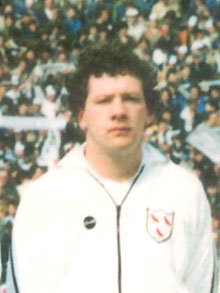 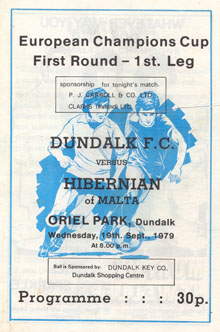 Recruited by Shelbourne from Celbridge United, Vinny McKenna was only 17 years old when he starred in a EUFA Cup game against Vasas Budapest at Dalymount Park in September 1971, when a 1-1 result just failed to overturn a 1-0 away deficit. Earning Youth International representation in his first Reds season, he quickly laid claims to a regular first team place. He ended up with five youth caps.

In 1973 in the company of Paddy Dunning and Ben Hannigan, he collected an FAI Cup Runner up medal, losing out to the Dave Bacuzzi-managed Cork Hibernians in the Flower Lodge final replay, after overcoming Cork Celtic in a triple-decker semi-final.

Two years later Bacuzzi again masterminded an FAI Cup final victory over Shelbourne, this time in charge of amateurs Home Farm. While future Oriel Park stalwarts Dermot Keely, Frank Devlin and Martin Murray came away with winners’ medals, Vinny had the company of Dunning and Mick Lawlor when he was adding another runner-up memento to his collection.

Dunning and Lawlor were already in the Dundalk panel when Jim McLaughlin decided to strengthen his squad during the double-winning 1978-79 season and he again turned to Shelbourne, picking up McKenna and Liam Devine in mid-season.

A utility player supreme, McKenna, with over 230 Shelbourne appearances to his credit, fitted in seamlessly and from the New Year onwards had commanded a regular first team slot on the way to the League Championship. He and Liam Devine were on the substitute’s bench for the FAI Cup victory over Waterford that completed Dundalk’s first League-Cup Double.

The arrival of Terry Daly and the return from Liverpool of Synan Braddish and Brian Duff intensified competition for starting places during the 1979-80 year and Vinny had to be content with just 10 starts (mainly in the minor competitions) and 11 substitute appearances. During the 6-match European Cup marathon he was called from the bench on two occasions, each away from home—against Malta and Glasgow Celtic.

But he was back in manager McLaughlin’s favour for the successful 1980-81 year, when he made an appearance in 47 of the 50 games, finally taking home an FAI Cup winner’s memento when Sligo Rovers were overcome in the final and adding two further winner’s medals (League Cup and Presidents Cup) and a runner up award for the League. Now settled into his favourite midfield role he was a starter for both legs of the UEFA Cup tie against Oporto.

After three high profile years at Dundalk his next season at middle-of-the-table Waterford was a big letdown. His final League of Ireland season saw him at three clubs—Drogheda, Galway and St Patrick’s Athletic—but all his efforts were thwarted by a hamstring problem.

Gaelic football was Vinny’s first game as there was no schoolboy soccer in his native Celbridge aand he didn’t play the game seriously until he was 16. Yet he made such progress that he won five youth caps after joining Shelbourne. His father had played at inter-county level with County Meath and Vinny also made it to the Kildare senior team. During the summer months he continued to turn out with Celbridge.

He played in every position with Shelbourne and because of his Gaelic prowess he was the first to be called upon when keepers were injured—he once saved a penalty against Drogheda!