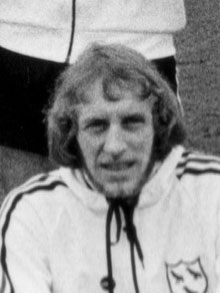 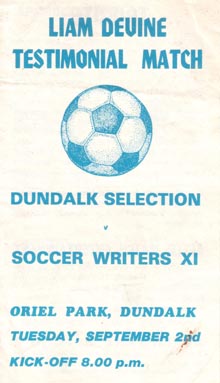 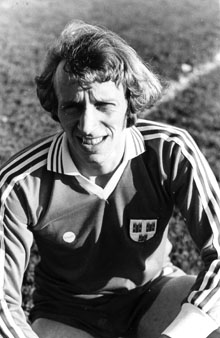 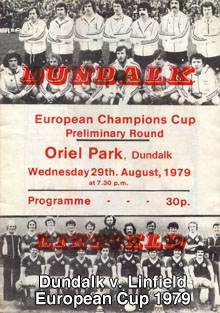 “There are, in football, occasions which transcend the normal demarcation lines of club and parochial loyalty…when the artificiality of sport is replaced by deeper issues of deep and touching humanitarianism”. Peter Byrne Irish Times Sep 2nd 1980, written on the occasion of an Oriel Park testimonial match for Liam Devine, between a Soccer Writers XI and a Dundalk Selection. A month later he died in a Dublin hospital.

In the previous March, after sharing in Dundalk’s success in League and Cup in the 1978-79 season and then participating, and leaving an indelible mark, in the epic 1979-80 6-game European Cup voyage, he had been diagnosed with cancer and was told at the age of 29 that his playing career was over.

He came to Shels from Maynooth Town and as a schoolboy played with Aston Villa Intermediates. In the 1973-74 season he made his first team debut but the Reds were permanently in the doldrums during his six Tolka seasons, rarely getting out of the bottom four and only twice advancing in the FAI Cup beyond the first round.

In the autumn of 1978 there was trouble in the Shelbourne camp and Jim McLaughlin, keen to strengthen his Championship squad, signed two of the Reds' disenchanted players, Vinny McKenna and Liam. At Oriel Park they joined former Tolka teammates Paddy Dunning and Mick Lawlor. Liam made his Dundalk debut in an Oriel Park victory over Home Farm and retained his place through a five-in-a row League wins sequence.

At season end Vinny and Liam collected Championship medals, their first senior mementos, and were both on the bench when Waterford were defeated in the FAI Cup Final.

In the following season’s European Cup campaign he had missed only one game—the away tie against Linfield—and in two of his five appearances he had come off the bench to score crucial goals. His first came in the 1-1 draw against Linfield at Oriel when he spread panic in the visitor’s defence after replacing Hilary Carlyle and with ten minutes remaining he headed the equaliser. He replaced the injured Mick Lawlor in the Hibs of Malta tie, again scoring in the 2-0 win.

Liam was an ever-present during that season until he played his last club match on Feb 3rd against Finn Harps at Ballybofey and shortly afterwards was diagnosed with cancer.