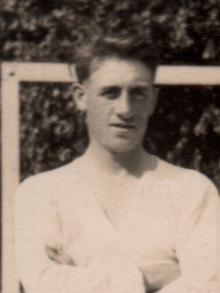 Dundalk opened its 1929-30 season with a new fullback partnership, consisting of Jimmy Kelly at right full and his partner Billy Brown, ex-Rochdale and Torquay United. After three games without a win Brown departed, Kelly moved to the left side and Johnny McKeown was recruited to take the right full position.

Until he left the club after the 1931 FAI Cup final, Johnny missed just two games over his two seasons. Over that period he had only two full back partners, Jimmy Kelly and later Gordon McDiarmuid. These two partnerships provided the stability for improved team performances, culminating in the successful 1930-31 campaign, with a runner up position in the League and qualification for the club’s first FAI Cup final.

The acquisition of Irish International Andy McCluggage, immediately after the Cup final loss to Shamrock Rovers in May 1931 saw the departure of Johnny. Before coming to Dundalk he had spent two seasons with Glentoran in the Irish League, making over 50 first team appearances.

His pen picture in Sport before the 1931 FAI Cup final described him as follows: “…a ‘rough diamond’…in other words the goods are always there if not polished up…few players so consistently good…fearless tackler…a hefty kicker…will fight to the bitter end…”