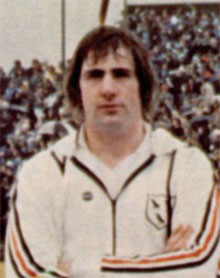 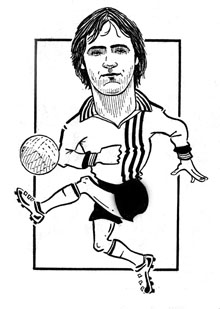 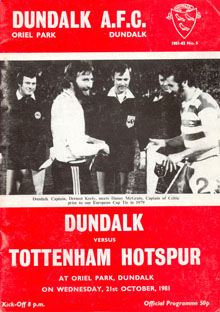 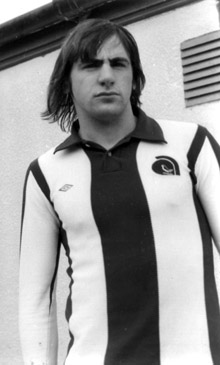 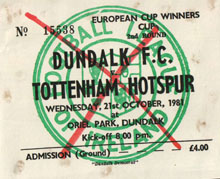 In 1934 Scotsman Hugh Carlyle, a strapping six foot plus centre-half, signed for Derry City from Motherwell and was appointed club captain. By the team he quit playing in the early 1950s he had become a Brandywell Legend.

Settled in Derry, his sons, Hilary and Paul, followed his example and had successful careers as professional footballers. Both had spells with Dundalk and coincidentally Dundalk provided the opposition for Hugh’s 1943 benefit game.

Under manager Patsy McGowan, teenage striker Hilary Carlyle spent four seasons with a Finn Harps team dedicated to an attacking style that brought them popularity but always came up short when the major trophies were on the line. A third place League finish in his first Harps season, 1974-75, was followed by the runner-up spot to Dundalk in 1975-76.

He twice sampled European competition fare while with Finn Harps, first in the 1974-75 Cup Winners Cup against the Turkish side Bursaspor and then the 1976-77 UEFA Cup aggregate 16-1 hammering from Derby County.

In squads that were stuffed with League of Ireland legends like Brendan Bradley, Terry Harkin, Jim Sheridan, Peter Hutton and Tony O’Doherty, Hilary was a quick learner and after a 1975 trial with Glasgow Celtic that included a friendly against Birmingham, an injured toe resulted in his failure to pass a medical and the proposed transfer was not completed. Harps had played Celtic in a 4-4 draw in January 1975 for the Burtonport Disaster Fund, and Hilary had scored a hat-trick.

In May 1975 at the end of his first season he was on the Dave Bacuzzi-managed Irish Amateur team that drew Czechoslovakia in the Qualifying Round of the Montreal Olympics. In the Tolka Park home tie Hilary opened the scoring when Ireland went down by 2-1.

During his Finn Harps spell he had spent two seasons in the North American Soccer League. His first visit was to San Diego in 1976, where in spite of playing in only half the games he ended up as leading scorer with 5 strikes. He returned to the NASL for the following year, starting with Las Vegas Quicksilver, in a squad that included the great Portuguese player Eusebio, and then was transferred to Team Hawaii.

The 1977-78 season brought more runner-up medals; in the League Championship there was a final day 2 points deficit behind Bohemians and a month later a final day loss in the Tyler Cup to Shamrock Rovers, after defeating Linfield and Glentoran in earlier rounds. When he returned from his third summer in the USA, Jim McLaughlin was alerted to the fact that Carlyle was a free agent and added another piece to his 1978-79 squad.

And what a season. Against conventional wisdom and all the pundit’s advices, McLaughlin’s 4-2-4 system was fronted by two big strikers—Carlyle and Cathal Muckian—who delivered 27 League goals. Carlyle struggled for fitness early in the year after a close season cartilage operation but the manager’s perseverance and faith in the two big men paid off and Dundalk kept the chasing pack at bay to deliver McLaughlin’s second League Pennant.

To put the icing on the season it was appropriate that Carlyle would have a starring role in the last act of the year, brushing past Waterford’s Tommy Jackson in the 90th minute of the FAI Cup final “and with his left foot blasting it to the net in a manner worthy of Roy of the Rovers” to copper fasten a 2-0 victory that clinched the club’s first League-Cup double.

His 18 club goals earned him the title of Club Topscorer and his 16 League goals was topped only by John Delamere with 17 (15 with Shelbourne and 2 with Sligo Rovers).

His good form continued into the following season and in the space of a month he scored 4 goals in the opening four League games as well as hitting one against Hibernians of Malta in the home tie of the first round European Cup tie.

His reward was selection for the League of Ireland team that met New Zealand at Tolka Park in October 1979, but immediately after he had opened the scoring he suffered a serious injury—badly torn ligaments around the left knee—that effectively knocked him out of the game for almost two years. He made two recovery attempts during that period but it was the 1981-82 season before he was fully back in harness.

For this season he had a new strike partner—Mick Fairclough—and their aggregate 26 goals helped secure Jim McLaughlin’s third League Championship. In one purple patch—a 4-match win sequence in December—they scored 12 goals between them.

Hilary again made a significant contribution to the last day clinching heroics, scoring with a spectacular header from a Leo Flanagan free-kick at St Mel’s Park against Athlone Town.

But the knee injury caught up with him and this would prove to be his last effective League season—in 16 League outings over the following two seasons he managed just two scores. He was released by Dundalk in January 1984 and he saw the season out with Finn Harps before retiring.

After leading the Dundalk front line to a 2-0 victory at Oriel Park over Hibernians of Malta in the 1979 European Cup, Mel Moffat Irish Press had no doubts about his selection of man of the match: “…. Gave a typical bustling performance … was the man more than any other who had the five man Hibs defence panicking … it was fitting that he should score the opening goal.”