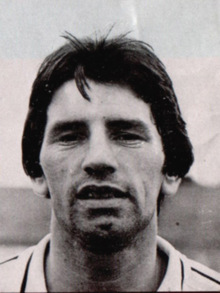 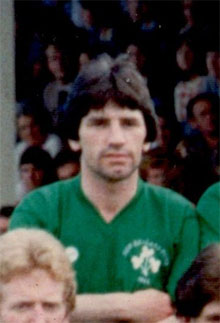 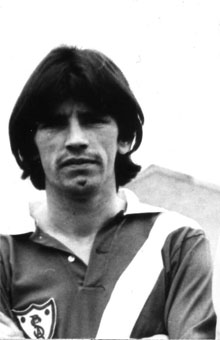 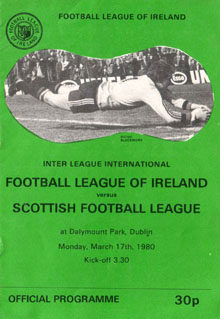 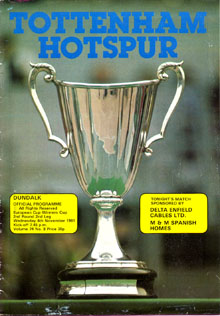 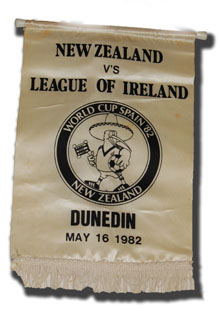 Inchicore native Sean Byrne was the son of Dessie Byrne, who had played with Dundalk in the 1940s and with St Patrick’s Athletic in the 1950s, when Pats had dominated the League of Ireland. Father and son both scored in losing FAI Cup final appearances with St Pats—Des scored an o.g. in the 1954 final when Drums came out on top by that single goal and Sean scored in the 1974 3-1 loss to Finn Harps.

Sean was taken to Oriel Park in February 1978 by Jim McLaughlin as a replacement for Tony Cavanagh. In the following summer he was reunited with his ex-St Patrick’s team mate Leo Flanagan but it was the New Year before the couple really teamed up. Byrne had spent the pre-Christmas period more often on the bench and when called upon was given a wide role on the right.

But a December injury to Mick Lawlor saw Byrne and Flanagan brought together and Byrne, ‘a dynamo of energy’, revelled in his new central midfield responsibilities and greater involvement. The most powerful League of Ireland central midfield partnership of the era was in place.

‘The most underpraised midfielder in the League of Ireland’ was McLaughlin’s comment in late April 1982 when Sean had received the Irish Independent’s Sportstar of the Week Award after his classic last day goal against Athlone Town had wrapped up the League Championship.

The citation read “The hard-working Dubliner had at times been overshadowed by the more spectacular skills of his midfield partners, Leo Flanagan and Barry Kehoe; but his consistency, tireless grafting, appetite for the battle and ability to score goals at vital times had endeared him to Oriel Park fans”.

And his performances on the European stage proved he could mix it with the very best, as witness his shackling of Ossie Ardilles and Glen Hoddle over both legs of the 1981 European Cup Winners tie when Tottenham Hotspur were fortunate to emerge with a 2-1 aggregate victory.

Capped six times by the League of Ireland selectors, he was a member of the League squad under Jim McLaughlin that visited New Zealand in 1982 playing against the National squad. A year later he accepted an invitation to move there with his family, joining Gisborne City, who were managed by ex Sligo Kevin Fallon, and over the following 10 seasons leading them to success in all the National League and Cup competitions.

In his first season he helped his new side to the final of the Chatham Cup, the equivalent of the FAI Cup competition here, but he sustained an ankle injury in the drawn first game, as a result missed the replay, which Gisborne lost to Mount Wellington.

He was not to be denied, however, and – as he had become accustomed to success in Ireland – capped his time in New Zealand with double honours in 1984, helping Gisborne to the national league title and the Air New Zealand Cup, and coming within a whisker of completing a treble in just his second year, only to see his side beaten by Manurewa in the Chatham Cup final.

After his two disappointments in the Chatham Cup, Sean was eager to reach the winners enclosure of the prestigious competition, and he managed it in 1987, when, with the years beginning to tell on his famous engine, he retreated from his habitual midfield role to that of sweeper, and proceeded to help the side all the way to Chatham glory.

He took out New Zealand citizenship and earned International honours, including participation in the 1986 World Cup qualifiers against Taiwan and Israel. He was honoured with five full caps and about a dozen other representative honours when New Zealand selections played against regional teams and visiting clubs, including England ‘B’, Newcastle United, Glasgow Rangers, Leicester City, Portsmouth etc.

In 1993 he moved to Australia as player-manager of Morwall, outside Sydney. In 2000 he was diagnosed with Motor Neurone Disease and died three years later, aged 48.

He was twice honoured with the Soccer Writers National League Player of the Month Award, first in September 1976 when he was with St Patrick’s Athletic and again in April 1979 in recognition of his contribution to Dundalk’s League-Cup Double and in particular his outstanding role in the FAI Cup final victory over Waterford, starting in the fourth minute when his shot completely fooled opposition keeper Peter Thomas.

A lovable character, he was noted for his dedication to fitness, always returning for pre-season training in the peak of condition. A lorry driver, he was affectionately known in Dundalk as ‘Yorkie’, a name derived from the television commercial featuring a lorry driver advertising the popular chocolate bar.

Nicknamed “Iron Lungs” by the fans and noted for his versatility, he and Leo Flanagan bossed every mid-field combination in the League of Ireland for the best part of half a dozen seasons. Jim McLaughlin described him as ‘the workhorse of workhorses…the man who did all the donkey work…the best player I ever had for hounding and closing down players.’

SWAI Player of the Month April 1979

5 All White ‘A’ International Caps