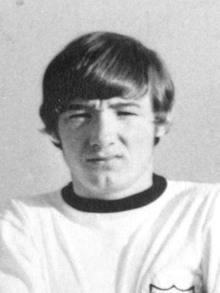 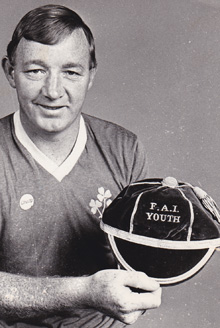 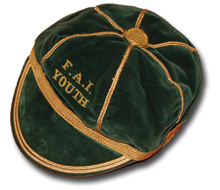 Willie McKeever started his football career with the Fatima schoolboy’s team United, run by his father, and later with local junior clubs Wolves and Celtic. He was only a Minor when he got a first team run-out in a July 1969 friendly against Brighton. In December 1969 he was selected for the Irish Youth’s squad and came on as a substitute in a scoreless draw against Wales.

Before the season ended he made his Dundalk debut in a 2-0 victory over Finn Harps. In the following season his Reserve team form under Liam Tuohy and an excellent display in the Leinster Cup semi-final 5-0 win over Bohemians helped to establish a permanent first team spot. On St Stephen’s Day 1970 he pocketed a Leinster Cup medal when Dundalk thrashed Shamrock Rovers 5-2 in the final.

In November Willie and his twin brother Gerry had lined out together in an Oriel Park League clash with Limerick, in the company of the McConville brothers Tom and Brian. Willie was a key member of the squad that Liam Tuohy led to Shield victory in 1971-72, when neighbours Drogheda United were defeated in the final.

In that year he shared the goalscoring duties with Joe Larkin, each finishing the year with seven goals. Until the arrival of John Coyne and Willie Waddell in the winter of 1973 Willie was on practically every line-out, missing only one game in 1972-73.

He was with Drogheda Utd. under Jimmy McAlinden for the 1974-75 and 1975-76 seasons. After a couple of seasons back playing junior football he signed for Dundalk under Jim McLaughlin in 1978-79 but got just one call to first team duty when coming on as a substitute in an October League game against Cork Alberts. After another few seasons with local junior teams, including Bank Rovers, injuries put an end to his football career.

From 1975 onwards Willie had been a member of the Irish Army, eventually serving 24 years, and where he added further to his football honours. Fielding with the Eastern Command teams, he won two All-Army Championship medals, one each for Gaelic and Soccer.

He also collected a couple of competition honours at junior level playing with the Gaels GAA team. When injuries called a halt to his football activities there was an Oriel Park Testimonial Match between the Defence Forces and a Dundalk Selection.

An inside forward who was a beaver for work… good engine… consistent performer… reliable.

For the best part of twenty years Willie has worked on the ground maintenance staff at Oriel Park.

Dundalk Match day programme pen-pic: “An inside forward who is a beaver for work … good stamina … consistent performer … reliable”.