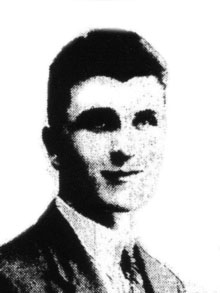 Full back Gordon McDiarmid was 20 years old when he first played with Dundalk in January 1927. “Impetuous, 12 stone of wire and whipcord, fears nothing on two feet, but will soon tone down into a first class defender” was the early verdict of the Dundalk Democrat’s soccer man. How right he was.

During the second half of the season he was also lining out with Belfast Celtic, winning a County Antrim Shield medal, and sharing in the Shield and Irish League victories. In the following season he partnered Fred Barrett but suspensions and injury resulted in two months absence in the New Year.

He went to Ballymena for their debut senior season of 1928-29 and was acknowledged as playing a key role in establishing their place in the Irish League, finishing a safe sixth in a 14-team League.

However, like the Dundalk Democrat, he was being advised by Ireland’s Saturday Night that ‘a little toning down would improve his worth’. That first season concluded with Ballymena’s victory in the Irish Cup, defeating League Champs Belfast Celtic in the final.

In the following season Gordon added an Irish Cup runner-up medal when Ballymena again qualified for the Cup final, this time going down to that season’s League Champs Linfield. After two years at Ballymena he returned to the Athletic Grounds in the middle of October 1930 as replacement for the injured Jimmy Kelly at left full.

For the next three seasons he became the automatic choice at left full, playing a key role in the club’s most successful period since becoming a member of the League. Partnering Johnny McKeown, the club secured League and FAI Cup runner up spots in 1930-31.

He had Andy McCluggage beside him the following year when the club lifted its first trophy, the President’s Cup. For the Championship winning 1932-33 year he renewed his 1926-27 full-back pairing with Davy Nelson and in the end of season review the Democrat commented: “Is a mixture of steel and whipcord. A great back with a prodigious drive. Tackles sternly. Opposing forwards would as soon run straight for a steamroller as for Gordon.”

For the 1933-34 season he returned to Ballymena and in the following year was with Glentoran, collecting another Irish Cup medal after the Glens overcome Larne in a triple-decker final, when he had Johnny Leathem in front of him at left-half and Ben Lewis in goal. He later played with Coleraine and Distillery (39 appearances in 1935-36).

Gordon came to prominence with Sandown Park, a very successful junior team, and with Bangor. Before coming to Dundalk he had been on the books of Linfield (1924-25) and Belfast Celtic (1926-27).He had been a bit player with Celtic during the championship-winning 1926-27 year, making 6 early season appearances of which two were in the League.

During the 1930-31 season he was described in the Dublin Press as “many consider him as the best left back in Southern football and a strong candidate for his place on the Inter-League team. Very clever in positional play and interception…stylish and a long kicker…has the right temperament…”