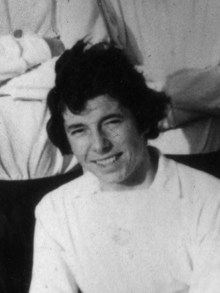 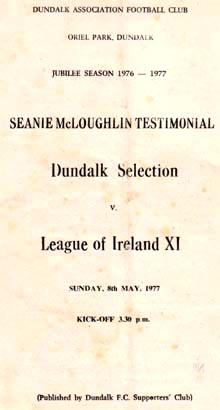 Making his League of Ireland debut with Finn Harps at the beginning of the 1974-75 season, it did not take the 19-year old Derryman Seanie McLaughlin long to make his mark. In the opening season League Cup, when Harps swept through to the semi-final stage after heading their section with 19 goals from seven games, the scheming of the newcomer and his comfortable playing with established players like Brendan Bradley, Tony O’Doherty, Charlie Ferry and Hilary Carlyle marked him as a player of the future.

After just half a dozen senior games he was lining out in the European Cup Winner’s Cup against Turkish opponents, Boruspor, and putting up a highly creditable performance against a full time professional outfit, losing 4-2 away and earning a scoreless draw at home. Oriel Park hosted the drawn League Cup final with Bohemians but Seanie had to be satisfied with a runner-up medal when an extra time last-minute goal from Johnny Fullam stole the honours in the Tolka Park replay. [Finn Harps record: Played 26, (Goals 4). League 15 (1); League Cup 10 (3); ECWC 1 (0)].

In the close season Jim McLaughlin came calling, having already secured another Derryman Seamus McDowell from Sligo, and the acquisition of Seanie completed his midfield line-up for the following season. And a memorable season it turned out to be. Finn Harps came racing out of the traps and by the end of November Dundalk were in their slipstream. But there was no stopping a rampant Dundalk and a closing 21-match unbeaten run secured McLaughlin’s first League Championship.

The McDowell-McLoughlin midfield partnership was a key ingredient. As well as their stock-in-trade craft and guile, and when required a bit of muscle, they were also the creators and suppliers of some of the campaign’s most memorable moments, with spectacular and stunning goals coming at regular intervals.

Seanie’s late-late equaliser a few days before Christmas at Flower Lodge against Cork Hibernians was a superb 25-yarder, after a move started by Tommy McConville had been played through McDowell. Oriel Park was the venue for his double-salvo against Cork Celtic in February that saw Dundalk join Finn Harps at the top of the table—each was from 25 yards into the top corner of the net, leaving a helpless keeper.

Dundalk’s opening game of the following season was a mouth-watering friendly against Italian League Champs Turino. Sean McLaughlin was an absentee, having requested permission to miss the game for personal reasons. The football community was shocked to hear that on that same evening he was one of three people killed in a car and motorcycle pileup in Donegal.

A fitness fanatic, who lived for football, he was an exceptionally gifted footballer who showed great potential and who, in his short stay with Dundalk, had won the hearts of its supporters.