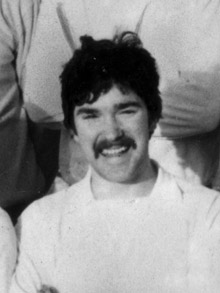 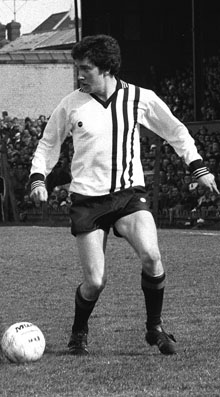 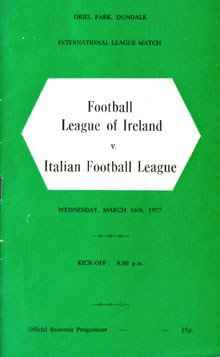 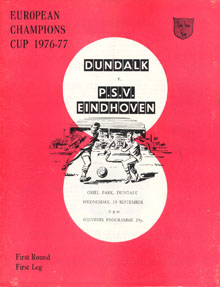 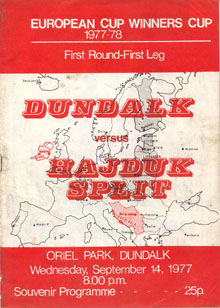 Derry-born inside forward/midfielder Seamus McDowell was playing with Derry Boys Club Athletic when he first impressed English League scouts. He spent the best part of two years with the Nottingham Forest Youth Academy. Highlight of his stay was a six-game tour of Zambia in May 1972 with a 16-man Youth squad, eight of whom would eventually see first team duty and which included Forest Legend and future European Cup hero John Robertson.

After returning home he spent a non-descript season, 1973-74, with Sligo Rovers, scoring 3 League goals, but was revitalised after fellow-Derry man Jim McLaughlin enticed him to Dundalk, on a transfer fee of £150, for the 1975-76 year.

McDowell and McLoughlin formed the midfield fulcrum that delivered Jim McLaughlin’s first League Pennant. When the pair were on song and in full spate, they epitomised Dundalk’s attacking flair that season, with goals coming from all over the shop.

The strikers, Flanagan and Sheehy, contributed 19 League goals, the wingers Dainty and Cavanagh supplied 10, defenders were credited with 9 and the McDowell-McLoughlin duo embellished the year with some stunning goals amongst their combined 13.

For McDowell the season’s highlight was in a December 5-2 victory over Shamrock Rovers, when he became the eight club player to score four goals in a League match. In a memorable night when Dundalk came from behind on two occasions and the floodlights failed, McDowell scored three long-range picture goals, set up the fourth goal for Sean Sheehy, before settling the issue when he scored his fourth from a penalty, minutes after the lighting had been restored, and after he himself had been taken down.

His contribution to Jim McLaughlin’s first League pennant win was recognised in March 1976 when he was selected Player of the Month by the Soccer Writers. This award was then in its fifth year and Shakes was the first Dundalk player to receive this prestigious honour.

The following season he played a major role in the European Cup heroics against PSV Eindhoven, scoring within seven minutes of the start of the home tie, finishing a Lawlor-Devlin move with a murderous left-footed 20-yard volley that left the Dutch International keeper, Van Beveren, gropping helplessly. Later in the season he and Mick Lawlor provided the midfield spark that delivered the FAI Cup to Oriel Park after a lapse of almost 20 years.

A lovely two-footed footballer, who could mix it if required, his form drew the attention of Glasgow Celtic but in spite of a trial they failed to follow up on their expressed interest. At one stage it seemed certain that he would join Hearts but that also fell through at the last minute.

His third Oriel Park season did not last long, thanks to a knee injury that failed to respond to treatment and sidelined him for the rest of the season. As a result, Seamus played his last club game in November 1977 and by the time he was fit to return he was with Coleraine in the Irish League.

For three seasons he stayed at the Coleraine Showgrounds [15 goals; 5 League, 3 IFA Cup, 7 All Others] before his final move in 1981-82 to Ballymena United where he again linked up with fellow-Derry man and his ex-Coleraine colleague Tony O’Doherty. They both featured in Ballymena’s European Cup Winner’s Cup tie against AS Roma.

Thereafter Seamus’s football exploits included a stint with Intermediate side Tobermore, later some junior football and to Five and Seven-A –Side tournaments which were very popular in the Derry-Donegal area. He spent the twilight of his career with Celtic Swifts in the Derry and District League.

Player of the Month March 1976