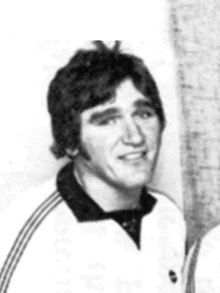 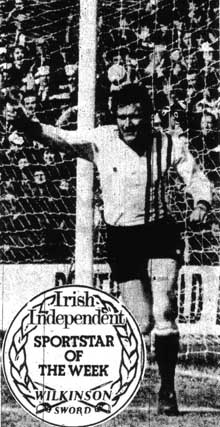 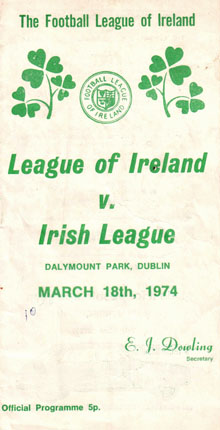 Shamrock Rovers must surely have regretted missing out on Terry Flanagan, when Bohemians snapped him up after he had played in a Hoops pre-season trial in 1973. It didn’t take him too long at Dalymount before he had established a highly productive partnership with Turlough O’Connor, which saw both of them collect the opening two Soccer Writers ‘Player of the Month Awards’ in the 1973-74 season.

They finished that season with 18 League goals each, sharing the top goal scoring table for the season, a half dozen goals clear of the rest of the field. Making 43 season all-games appearances, he hit 29 goals in the process. On April 4th 1974 while delivering a 7-0 spanking to St Patrick’s Athletic, his four goals equaled the Bohemians club best in a League game.

In an FAI Cup replay at Oriel Park the Bohs duo combined to destroy Dundalk by 4-0 with Terry hitting a hat-trick and setting up the other one for Turlough. Big, strong, bustling, and deceptively skillful for such a big man, Flanagan “all fire and skill” never spared himself in pursuit of goals. Blessed with a good touch and excellent ball control, he relied on guile as much as force, and could spread the ball around with delicate ease.

However his first League of Ireland season brought no winner’s silverware but a batch of runner-up awards—in the League and Top Four Cup (behind Cork Celtic), in the Texaco Cup (by an aggregate 5-3 against Portadown) and in a replayed Leinster Cup to Dundalk. He was also honoured with an Inter-League cap, scoring in a 3-2 win over the irish League.

An overly active closed season—playing with too many seven-a-side teams—leading to burnout and injuries in the following season curtailed his activity to 14 League appearances (3 League goals), but he collected a League Championship medal, along with the O’Connor brothers, Turlough and Padraig, as well as Sean Sheehy, after Bohs runaway 9-point margin over Athlone Town. He also added a Presidents Cup memento to his collection.

Although he scored a fine goal for Bohemians in their European Cup tie against Glasgow Rangers, a temporary loss of form cost him his first team place at Dalymount. A half dozen games into the 1975-76 year Jim McLaughlin’s League efforts had stalled for want of scoring punch up-front to finish the many chances being created by Dundalk’s midfield and he signed Terry, now deemed surplus to Bohemian’s requirements. Linking up again with Sean Sheehy, a goal on his debut in a 4-0 win over Shelbourne was followed by a brace against Waterford.

A week later, in a 2-1 win over Drogheda, he made it four goals in three starts, driving Dundalk up to second spot in the table. An unbeaten run to the end of the year delivered the Championship—McLaughlin’s first and Flanagan’s second (after contributing 11 goals).

In his second Dundalk season he was the goal-scoring hero in the two Cup victories—Leinster Senior Cup and FAI Cup. In the Leinster Cup he scored the only goal in the late April final against his old club Bohemians, the club’s last outing before the FAI final. Having already fired two crucial goals in the earlier rounds of the FAI Cup (scoring the last minute winner against non-League Pegasus and in the drawn semi-final against St Patrick’s Athletic) he ensured that the 1977 FAI final against Limerick would be known as ‘Flanagan’s Final’ with his 2-goal salvo.

In the club’s first FAI success in almost 20 years, an otherwise forgettable final was made memorable by the quality of both goals—the first after half an hour when Jim McLaughlin, taking a return pass from Mick Lawlor, borrowed his way into the penalty box and struck a low cross with precision into the path of Flanagan who swept the ball home.

His second, with just three minutes remaining, came from a corner he had won by his tenacity when ringed by three defenders. From Seamus McDowell’s perfectly arched corner kick, he climbed above two defenders and headed the ball, almost out of the keeper’s hands, into the top corner of the net. It was a classic goal of its type and worthy of a Cup final. His ‘two-goal hammer blows’ earned him the Wilkinson Sword Irish Independent Sportstar of the Week award.

But for memorable goals it would be difficult to surpass his winner against Hadjuk Split in the first-leg European Cup Winners Cup in September 1977. Before a jam-packed Oriel Park, and with just five minutes remaining, Seamus McDowell swung in a neat cross, where Jim McLaughlin with his back to goal and surrounded by defenders nodded the ball back to Flanagan, who swung his way past a defender before letting fly into the back of the net.

In his third and last Dundalk season he also completed a set of all the League of Ireland trophies when he added a League Cup medal to his League, FAI Cup, and Leinster Cup medals, supplying goals in each leg of the two-leg final against Cork Alberts, ultimately won on corners at Flower Lodge.

He participated in four European campaigns, two each with Bohemians and Dundalk, making three appearances with each club and scoring a goal with each club.

Irish Independent Sportstar of the Week 6th May 1977.

While each member of the Dundalk team played his heart out for victory, few will deny that had it not been for Dubliner Terry Flanagan and his two-goal hammer blows in the 33rd and 87th minutes the result might have been less joyful for the Border-side club. For his major role in the defeat of plucky Limerick, delivering the FAI Cup, we nominate Terry "Sports Star of the Week."