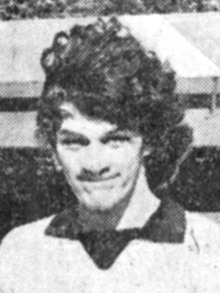 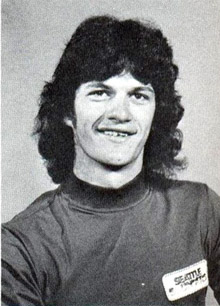 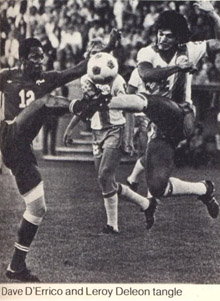 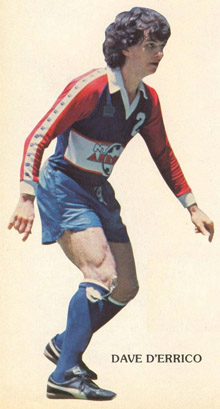 Wing back defender Dave D’Errico grew up in Harrison, New Jersey playing for the local Kearny Scots. He was a key member of the 1973 Hartwick College squad that advanced to the quarter-final of the 1973 National College annual championship and for his performances he received the ultimate college accolade of being named a Soccer All-American.

This was his passport to a contract with the Seattle Sounders for the 1974 North American Soccer League (NSAL). In a squad that included Willie Penman, Dave got six starts with the Sounders and had made his international debut in September 1974.

Penman recommended him to Dundalk manager John Smith and in September 1974 he headed for Dundalk to improve his skills. At Oriel Park he was joined on the same mission within a few weeks of his arrival by his fellow-American and International team-mate, Bobby Smith.

Early in the League programme Dave was replaced by Smith and spent the rest of his time at Dundalk, until his mid-December return to the United States, either with the reserves, under manager John Murphy, or as 12th man with the first team. He departed Dundalk in mid-December and returned to Seattle.

Over a seven season career, with five clubs, he became a leading player in the NASL circuit, and made 123 appearances. In the period 1974-77 he played in 21 International matches with the USA team, including four games in the 1976 World Cup qualifiers. He spent the 1978 season with the New England Teamen, under the management of Noel Cantwell, and with another Irish International Gerry Daly driving the midfield.

For his part in the Teamen’s success in winning the Eastern division and qualifying for the championship play-offs, Dave was selected on the season’s NASL All-Star XI. Other clubs he assisted within the NASL included Minnesota Kicks (1977), Rochester Lancers (1979) and San Diego Sockers (1980). From 1978 onwards he began to double up between the NASL and the Major Indoor Soccer League (MISL).

He later acted as player-coach with Charlotte Gold, in the short-lived United Soccer League. Inducted into the Hartwick College Hall of Fame in 1995, he remains involved in soccer through his ownership of a soccer portal; www.iam360soccer.com.