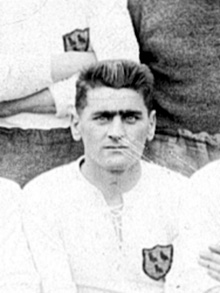 During his two seasons with Dundalk, Belfast-born inside left John Mathieson was the team’s schemer-in-chief, feeding Eddie Carroll to his 75-goal fest. He was an ever present for the 1928-29 year until injured in the drawn Leinster Senior Cup final against Shamrock Rovers and he was badly missed for the replay.

In his pre-senior days he played with Sandown Park and Glentoran Seconds, before making his Irish League debut with Carrickfergus club Barn in the 1924-25 year, lining out in a variety of positions. After short spells with Shelbourne and Glentoran he had signed for New Brighton in the English Third Division for the 1926-27 season (11 apps, 3gls), where he linked up with his older brother Allan.

During his two-year Dundalk spell, New Brighton had retained his registration and he returned to them for the 1929-30 season. He was back in Belfast within another year, first with Belfast Celtic and then with Glentoran, with whom he won a League Championship medal in 1930-31 and the Irish Cup in the following season.

He was at centre half with Ards during the 1933-34 season when they attained their best League finish in years and went to the final of the County Antrim Shield, taking a 7-1 hammering from Linfield.

The following season he captained Larne from the centre-half position when they shocked Belfast Celtic in the Irish Cup semi-final in 1934-35. That year’s final went to a triple-decker before Glentoran, with old Dundalk hands Ben Lewis and Gordon McDiarmuid, emerged victorious.

John was equally well known as a boxer, appearing under the name Jim Mason. In the early 20s he reached the semi-final of a Gold Belt tournament for the feather-weight championship of Ireland, but an injury forced his withdrawal. His brother Allan, also an inside forward, was twice capped with Northern Ireland.

“ One of the neatest and most consistent players Dundalk ever had….few inside forwards in Ireland with his ball control….a great swerve….at times could shoot wonderfully….never lost his control….always well worth watching….his help to his other forwards in opening out the game was marvellous….he started this embroidery business, a game as cute as seeing trick billiards being played by Melbourne Inman…a pleasant fellow while with Dundalk and always gave of his best”. Dundalk Democrat’s