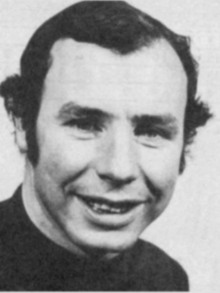 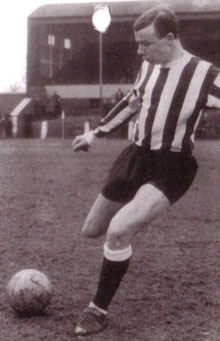 But his £11,500 move to Second Division Newcastle for the 1963-64 year presented him with the opportunity to display his effectiveness. At inside left cum-midfielder he linked well in attack, frequently popping up in the box and always liable to find the net.

He scored in Newcastle’s crucial promotion-winning victory over third place finishers Bolton in the 1964-65 season, but then found First Division defences a much more difficult proposition.

A £10,000 move to Third Division Swindon Town in 1966, where he first linked up with John Smith, brought further honours when in 1968-69 the Robins achieved promotion to the Second Division and coupled that with victory in the League Cup.

After a series of joint-killing acts in the early rounds they defeated Arsenal in the Wembley final after extra time and Willie got a piece of the final day action, replacing John Smith with ten minutes remaining of normal time.

His last three English League seasons, before coming to Dundalk in 1973, were spent at Third Division Walsall, again in the company of John Smith.

But the expectations fuelled among Dundalk supporters by the signing of half a dozen English League imports were not fulfilled and a 10-match winless stretch in Nov-Dec killed all League hopes.

It was not the fault of the 34 year-old Willie and his skilful midfield performances were recognised on the terraces when he was the recipient of the Supporters Player of the Year Award.

A stylish player and great passer, he also scored some memorable goals. He played a major role in the lone success of manager Smith when the Leinster Cup was annexed after defeating Bohemians in a replay.

He stayed for a second season but was released at the end of the 1974-75 year. In the summer of 1974 he played with Seattle Sounders in the North American Soccer League, where one of his colleagues was Dave D’Errico and whom he recommended to John Smith for the following season.

Willie’s last active season was at Redditch United in the Southern League. He afterwards settled in Walsall where he was employed by a sports company.

Strangely, during his first Oriel Park season he was travelling to Ireland for each match, usually arriving on Sunday morning while at the same time he had been signed as player-manager of part-time non-League club Cheltenham Town. Equally strangely neither Willie nor Dundalk FC saw anything amiss in this arrangement.

However, for registration reasons he never lined out with Cheltenham and not surprisingly Willie did not see the year out as Cheltenham manager.