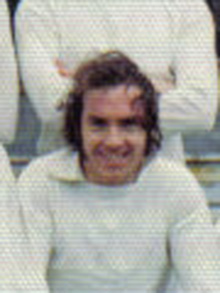 He was one of the early signings made by John Smith, the ex-Walsall player-manager, for Dundalk’s 1973-74 season. He missed only a handful of games in his first term and was an ever present in the following year until he departed immediately after the FAI Cup defeat against Home Farm in February 1975.

Whether at left-full back or wing half, his energetic all-action style made him popular with supporters. His only club honour came in John Smith’s first season in charge when Bohemians were defeated 1-0 in a replay of the Leinster Senior Cup in March 1974, after finishing all-square in the St Stephen’s Day final.