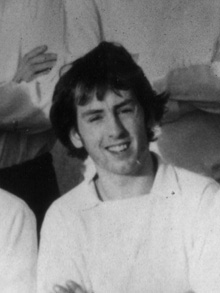 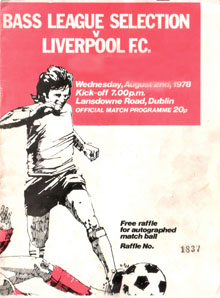 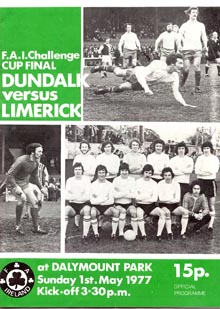 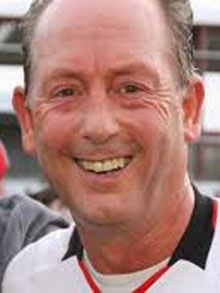 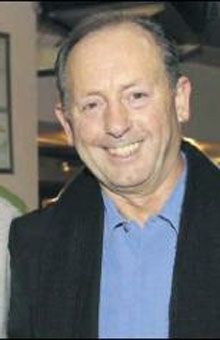 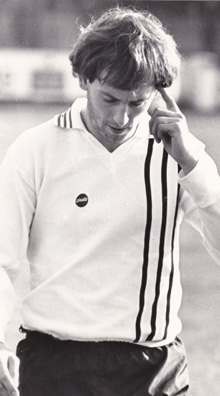 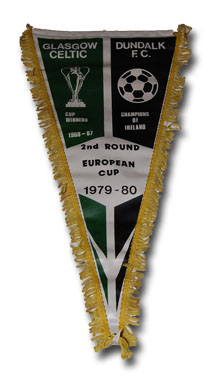 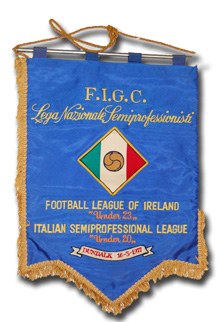 Right-winger Jimmy Dainty was one of a batch of new players, unveiled by newly-appointed player-manager John Smith in 1973, in a costly and failed attempt to restore the club’s fortunes. Smith had finished his English League playing career at Walsall and Jimmy was one of a trio of ex-Walsall players who joined him at Dundalk, but who failed to deliver on the club’s expectations.

When only 18 years old, Jimmy had made 5 English League appearances with Walsall and he made his Dundalk debut in a 4-3 League Cup loss to Shamrock Rovers on Sep 2nd 1973.

Over twelve months later it was back to the drawing board with the arrival of Jim McLaughlin as Smith’s replacement. This time around there was no mistake and for six seasons Jimmy Dainty played a central role during the hugely successful ‘McLaughlin Era’.

With Tony Cavanagh on the other flank, McLaughlin had two of the most effective wingers of the era at his command and their early conversion to Jim’s 4-2-4 recipe provided the dynamics for both success and high entertainment value.

Quick and direct, his tracking back and foraging also provided him with extra space to fully utilise his blistering pace and ball control and his outstanding contribution was recognised by the supporters when he was twice selected Player of the Year, in the League winning 1975-76 season and again in the following year after the FAI Cup victory.

For good measure he was a regular goalscorer, finishing off a minimum of half dozen goals in each of his first six club seasons. Appointed penalty taker for the 1978-79 League-Cup Double-winning year, he converted five penalties.

By the time he departed at the end of the 1979-80 season, he had two League Championships, two FAI Cup successes and a batch of LOI Representative appearances to his name. At the beginning of the 1979-80 season, his last with the club, he spent a couple of months with Alliance Premier League side Worcester City where he made 16 appearances, not making his Dundalk season debut until the end of October.

In his last club game he scored in a 3-2 win over Sligo Rovers in the last match of the 1979-80 League when Dundalk finished a point behind League Champs Limerick. Jimmy moved to Sligo for the 1980-81 year but after scoring four League goals he departed in January for Waterford, missing Sligo’s run to the final of the FAI Cup and ironically losing to the Westerners in the replayed semi-final.

Jimmy’s early football was with Coleshill, a club whose founders included his father and Richie Blackmore’s father, and whose grandmother spent a time as club manager!

As a 17-year old he was training with Wolverhampton Wanderers but a spell in hospital scuppered his hopes for a football apprenticeship and when he had fully recovered he signed with Walsall. He was with West Bromwich when he got the call from John Smith to come to Oriel Park in 1973.

Returning to England in 1981, after eight Irish seasons, he played in the Birmingham Leagues with a number of clubs—Coleshill Town, Slade Celtic, Paget Rangers, Concorde—and for the last 20 years he has been a member of the Aston Villa Old Stars.

He was instrumental in bringing them to Oriel Park in the early 1990s. He is a regular visitor to Dundalk and on his 2009 trip he lined out against the Manchester United Veterans and attended the Gala Dinner induction of the 1978-79 Double-winning squad into the club’s Hall of Fame.

For nearly 30 years Jimmy has been running his own business, supplying tools and equipment to the electrical manufacturing trade and is the sole agent for a German company. For 25 years he also had a successful business hiring out bouncy castles and inflatables, which he has cut back in order to concentrate on his main business.

The Argus on Jimmy’s departure from Oriel Park : “One of the fastest and most natural wingers in the game. Quick and direct, his tracking back and foraging also provided him with extra space to fully utilise his blistering pace and ball control and his outstanding contribution was recognised by the supporters when he was twice selected Player of the Year, in the League winning 1975-76 season and again in the following year after the FAI Cup victory.”