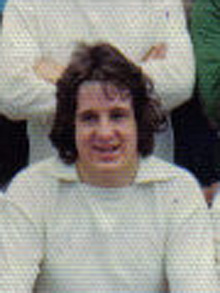 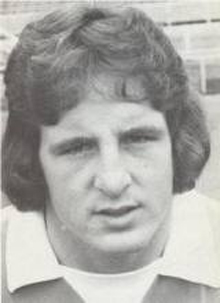 A new Board and a decent wage budget after several years of near paupery was the background against which new player-manager John Smith made his preparations for the 1973-74 season. A number of imports from the English Leagues—Jimmy Dainty, Willie Penman and Dougie Devlin—formed the centre piece of his plans.

But after a couple of months he was sending for reinforcements and amongst the new winter arrivals was inside forward-cum-centre forward the 23 year-old John Coyne, ex Tranmere Rovers and Hartlepool United, who over the previous couple of seasons had made 70 English League appearances, scoring 13 goals. The newcomers did not make for any significant improvements but Coyne contributed a useful 10 goals from 21 starts, finishing second on the marksmans’ list to Harry Cobbe.

He remained for a second term, which saw the November 1974 introduction of Jim McLaughlin as player-manager, and this time he was at the head of the club’s scoring list. John departed immediately following the FAI Cup first round defeat by Home Farm, with a more-than-useful strike rate of a goal every second match.

Signed by Cork Hibernians in late February as a replacement for the injured Dave Wiggington he scored on his debut against local rivals Cork Celtic and had three Hibernian outings (two of them as substitute) before being released. After short spells at Blackpool and Wigan Athletic, John’s last attempt to make it in the English Leagues ended in the winter of 1975 when he made 4 appearances with Fourth Division Stockport County.

He had spent the summer of 1974 playing in the North American Soccer League, starting the season with Dallas Tornado and finishing the season in the company of Jackie McManus with the Boston Minutemen. He returned to the States for the following two seasons with Toronto Metros-Croatia (1975) and Hartford Bi-Centennials (1976). In his three American League seasons he scored 24 times in 68 appearances.

Ever on the move, he finished his football career in Australia, initially with Brisbane City and later with Sydney club Leichhardt. In the 1979-80 period he was honoured with eight appearances for the ‘Socceroos’, the Australian International team, four of which were at full International level (against Taiwan, Czechoslovakia [2] and Mexico) and the other four at ‘B’ level.

John has two sons with successful professional football careers. Chris, who has Socceroo honours at youth, under-23 and at full international level, has played more than 300 games in the English Leagues since the mid-90s, over 200 of them with Luton. A central defender, he was elected Luton player of the year in 2002-03, and was on the PFA League One team of the year in 2004-05, Luton’s promotion year. For the 2008-09 season he was with Colchester.

Another son, James, also a defender, who spent short periods with West Ham and Dutch club Den Haag, has played most of his football in the Australian League with Perth and in 2002 was the Western Australia Player of the Year.