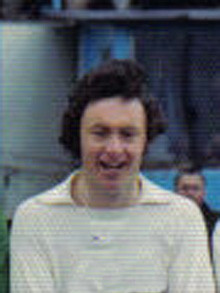 Ex-Bohs Harry Cobbe was taken to Dundalk by John Smith for the 1973-74 year. A promising opening—eight wins in the first ten games and qualification for the semi-final of the League Cup—signalled a successful season. Harry contributed six goals in his first eight games, but a disastrous League spell—a winless nine-game stretch from the beginning of November—killed all hopes for a successful season and saw Harry sidelined for a while.

A pacy workmanlike player, he returned to first team duty for the last six weeks of the season and his 12-goal total saw him at the head of the scoring list, two better than John Coyne. He stayed for a second season but the goals had dried up.

He was nineteen years old when he joined Bohemians from schoolboy team Young Elms, playing at left-midfield and winning a President's Cup medal. Before coming to Oriel Park, where he was converted to a striker, he spent a season with St Brendan's collecting a Leinster Senior League medal as an orthodox left-winger.