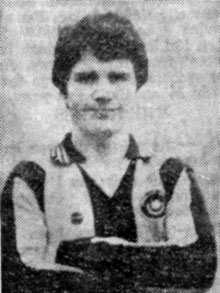 As a teenager Gerry signed for Glentoran and made a dream start, scoring on his debut against Linfield in a key 4-0 League victory, en route to the Glens success in the 1971-72 Irish League Championship. A month’s trial at Blackpool at the start of the following season and impressive displays in three reserve games came to nought.

Dave Bacuzzi brought him to Cork Hibernians for a month’s trial, but after one game in October, Gerry returned to Belfast—his abiding memories of his short Cork stay was the intensity and severity of the Bacuzzi training programme!

After the appointment of a new management committee at Dundalk in January 1973, Gerry was one of a number of new signings brought on board for the FAI Cup and which included two of his former Glentoran teammates, Tony Cavanagh and Joe McAleavey.

He scored on his Dundalk debut in a 2-0 win over Cork Celtic. Released at the end of the season, he moved to Drogheda United where at last he found himself in for the long haul.

Over the following six seasons he became part of the United Park furniture, twice helping himself to the title of club League topscorer and helping Drogheda to their best positions since joining the League, finishing in third place for three consecutive seasons (1976-77, 1977-78 and 1978-79).

In this six season spell, Gerry scored 27 League goals. Very serious car accident injuries had reduced his involvement in the 1974-75 season and he failed to make the starting line-up for Drogheda’s FAI Cup final appearance in 1976, when they lost to Mick Shelley’s lone goal for Bohemians.

The tiring car journeys from his Belfast home finally caught up with him and he returned to the Irish League where he continued to knock in plenty of goals during spells at Coleraine (33 goals) and at Crusaders (43 goals). In the 1980-81 season he was Coleraine’s top club scorer with 18 goals.

He retired after a final year with Carrick Rangers, and in spite of a terrible club season he earned his fourth top scorer award with 5 goals. In his 15 seasons between the Irish League (8) and the League of Ireland (7) he was credited with over 120 goals.

He worked in the building trade for a number of years and now runs his own contract cleaning business in Belfast.