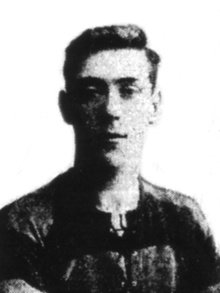 Pat Lennon was on the Belfast Celtic team that won the Irish League in 1928-29, annexing the Championship for the fourth consecutive year. He joined Dundalk for the following season, playing at right-half with Sam Patton and Bob Ferguson completing a very experienced half-back line.

But a single win in the first ten League games, against the hapless Jacobs, terminated with a two-month suspension for Pat after a fractious confrontation with Shamrock Rovers at Milltown.

He afterwards played with Derry City and Waterford. In Waterford’s first League season, 1930-31, Pat was at centre-half when they landed the Shield, remaining unbeaten through the 11-match programme.

Pat’s first honours came with Manilla in 1924-25, winning the Belfast Minor League First Division, and the following season in the Third Division of the Alliance League.

The Carrickfergus Irish League team Barn United was his first senior club and playing at centre-half back he quickly progressed from the reserves.

A few months into the 1926-27 year he was appointed club captain and when Barn went out of existence at the end of the 1927-28 year, Pat ended up at Celtic Park.

He was on the following year’s squad that delivered Celtic’s fourth Championship on the trot. During his two seasons at Celtic Park, 27/28 and 28-29, he made 23 appearances and scored seven goals.

“Lennon undoubtedly has talent …. In the course of time his skill will become more pronounced …. Today he is a fullback of merit … is impetuous; but is young and the rough school of experience will tone him down. As of now he is improving with each game.” Ireland’s Saturday Night after his first season with Barn.