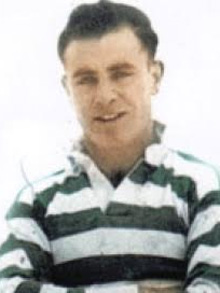 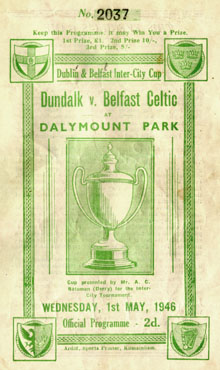 At the time of his death in Sep 2014 former Dundalk player Hugh Dickie Doherty in his native Buncrana, aged 93, and who had also played with Glasgow Celtic, was the longest surviving player of both clubs.

Buncrana based right-winger Dickie Doherty arrived at Oriel Park in September 1945 and made a good impression with the reserves. He made his first team debut in late October in an important Shield game against Shamrock Rovers at Milltown in unusual circumstances—club legend Joey Donnelly had been dropped for the first time in 16 years.

Dickie celebrated his debut with a 2-1 win. According to Dundalk Democrat ‘…although handicapped by badly-clogged boots, he had a very good debut…like most Derry players he showed cleverness in his short-passing game..’

He held his place and with Arthur Douglas, his inside partner, they fed centre forward George Sterling to a season haul of 24 goals and Hugh helped himself to 8 goals. Having to face round journeys of up to seven hundred miles for the club’s away games in Munster, he frequently did not return to his Buncrana home until Monday evening.

He played in the FAI Cup game at Milltown against Shamrock Rovers, when part of a wall collapsed injuring many young boys.

As Hugh was nearby he pulled a child out from under the debris and carried him off the pitch. The following week he received a standing ovation from the Dundalk crowd as his picture, with the blood stained shirt, had appeared in the national newspapers.

His impressive performances and his dedication in a poor club season paid off and earned him a move to Parkhead the following August.

Pre-war he had been spotted by a Celtic scout and went to Glasgow for a successful trial but the outbreak of the war put paid to plans for Hugh to sign with Celtic.

A bad temple injury on his 1947 Celtic debut against Queen of the South in the following January that required five stitches did not deter Hugh—the following week he appeared against Queen’s Park in a scrum cap!

Signed as an amateur, after four first team games with Celtic (3 League, 1 Scottish Cup) he was transferred to Blackpool, becoming an understudy to Stanley Matthews, and on a club tour he scored the only goal against a Danish International Selection at Copenhagen.

After damaging the cartilage in his knee, a career threatening injury, he moved back to Scotland in January 1949, seeing out the 1948-49 season with Raith Rovers, with whom he played once in the Scottish Cup. Continuing injury problems forced his retirement in late 1949.

Starting with Buncrana Celtic, he had spent part of the pre-war period with Derry City. After his Irish League, League of Ireland, Scottish and English League excursions, he returned to Buncrana, playing with local club, St. Mary’s, and became PRO for the Inishowen Football League, a position he filled for more than three decades.

He was a member of the Buncrana Cup Committee from the 1940’s to 1996 and was heavily involved in the purchase and development of Maginn Park, the headquarters of the Inishowen League.

In the 1970s he was one of the main driving forces behind the efforts to secure League of Ireland football for Buncrana.

And these years of dedicated service have been recognised by a number of sporting organisations. In 2012, he was honoured by the Ulster Football Association in appreciation for services to football.

He was the recipient of the John Sherlock service to Football Award 2013, which was presented by the FAI at their AGM.

And in February 2014 he was awarded The Donegal Sports Star Hall of Fame Award 2013.

Democrat “A great find … a player with a grand future … I like the speed of his play … the quick transfers with either foot … the well judged dropping centres and the crisp short pass.” After a 3-1 victory over Cork to go top of the Shield.