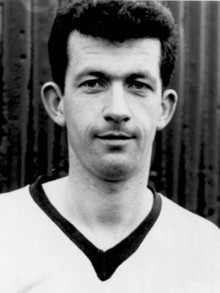 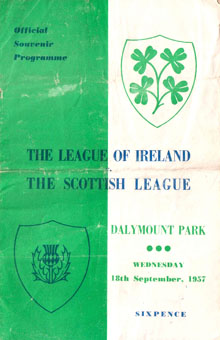 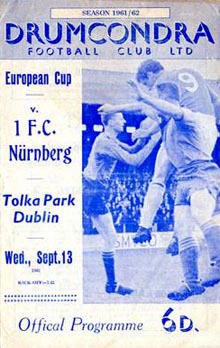 After making his debut early in the 1953-54 season, winger Stan Pownall (ex-Portrane) became a panel member of the powerful Drumcondra squad that for half a dozen seasons in the 1950s jousted with their great city rivals Shamrock Rovers for all the honours. Starting on the left wing he switched to the right side when Willie Coleman joined the Tolka squad.

Before he left for Glentoran for the 1958-59 year he had collected Winner’s and Runners up medals in both the League Championship and the FAI Cup, and in 1957 had twice been honoured by the League of Ireland selectors, playing against the Scottish and English League.

In April 1960 he was on the Irish League team that played against the League of Ireland at Tolka Park, joining that rare group who were awarded Inter League caps on both sides of the Irish border.

After a half dozen games with Glentoran at the beginning of the 1960-61 year (having played a total of 44 games and scored 13 goals with the Glens) he returned to Drumcondra in time to pick up another League Championship trophy and his second FAI Cup final appearance when St Patrick’s Athletic foiled Drum’s Double efforts.

He arrived at Oriel Park in the summer of 1962 with former Drumcondra mates Tommy Rowe and Billy Kennedy to take another League Championship memento. Lining out on the left wing, an injury in the fourth League game against St Patrick’s Athletic sidelined him for three months but he returned for the last five crucial games, when his very direct wing play and powerful shooting were crucial in the run-in that delivered the League Pennant to Oriel Park after a gap of 30 years.

When winning a Presidents Cup medal in the opening fixture of the 1963-64 year against FAI Cup holders Shelbourne he replaced the injured Leo O’Reilly, scoring seconds after he took his place, and becoming the first Dundalk substitute to get his name on the score sheet.

Injuries disrupted his second season but he was on the team that performed heroically against Zurich when Dundalk became the first League of Ireland team to win an away tie in the European Cup. His final game came in the FAI Cup 7-0 mauling from Shamrock Rovers at Milltown.

When his football playing days were over he renewed his hockey interests, turning out with St Itas in the Irish Senior League and he had a stint coaching the UCD team in the Leinster Senior League in 1966-67.

A carpenter, he worked on the departure lounge at Dublin Airport and he spent almost 20 years with Technicon from 1967. When his football days were over, he turned to golf.