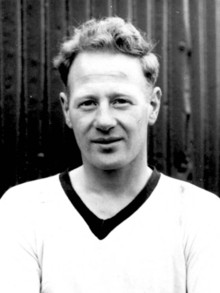 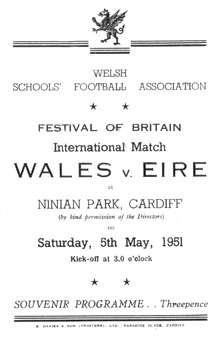 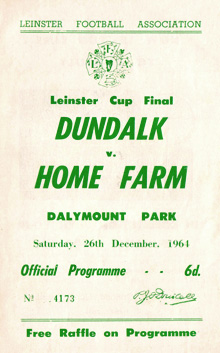 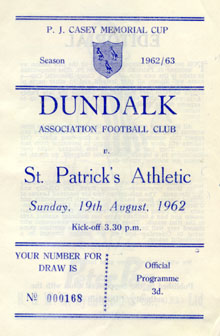 As a schoolboy Leo O’Reilly couldn’t make up his mind which sport to specialise in, winning a Schoolboy International Cap against Wales at Cardiff in 1951 (1-1 draw), while the following year he was the Irish Youth Cycling Champion, raced over 1000 metres.

He and his brother Seamus competed at sports meetings all over Ireland and while Leo decided to concentrate on football, Seamus continued with track cycling, winning 18 National titles before he retired.

Although his Schoolboy club St Finnbars was a Shelbourne nursery and was managed by Gerry Doyle, it was Shamrock Rovers who signed Leo in 1954 after he had played at Milltown in a Leinster Senior League game with Rathmines Athletic.

A regular scorer with Rovers Reserves—a Leinster League total of 47 goals—led to his senior call-up while not yet 20 years of age. He certainly made an impact on his entry, when on his League of Ireland debut he struck 4 times in Shamrock Rovers 7-3 win over bottom of the table Dundalk on February 19th 1955.

Although Leo was selected as 12th man for that year’s FAI Cup final, the eighteen year old Hughie Gannon got the nod after the last minute defection of Paddy Coad and picked up the Winner’s medal.

A few days after the Cup Final win over Drumcondra Leo was a last minute substitute for the injured Paddy Ambrose for Paddy Coad’s benefit match against Chelsea, celebrating their Golden Jubilee year and winners of the English First Division for the first time in their history.

Before a rapturous crowd of 19,000 at Dalymount Park, Leo scored twice inside the first 23 minutes on the way to a 3-2 win for Coad’s Colts. The injury to Ambrose had occurred on the previous day in a Dalymount Park international against Holland, which drew a smaller crowd than the Benefit game!

In his third Rover’s season of 1956-57 he collected his first League Championship medal but with so much talent at Milltown he moved to Limerick for the 1958-59 season.

Within a couple of weeks he had helped the Shannonsiders to their first League of Ireland Cup success when they took home the Dublin City Cup, scoring in the 4-3 final victory over Drumcondra, and he was selected on the League of Ireland team against the Scottish League.

It got better the following year when Limerick took their first League Championship Pennant and earned their first entry into European competition. Leo got his name on one of their away goals in the 9-2 aggregate loss to Berne Young Boys.

After 4 years at the Market’s Field, and a short spell at Longford Town, Leo was on the move again—with 2 goals on his Dundalk debut in the opening game of the 1962-63 year. By the 2nd of September a hat-trick against Drumcondra in the Casey Cup gave him 6 goals in 4 starts but before September was out he was at right half covering for the injured Tommy Rowe.

With Jimmy Hasty at centre forward, Leo became first choice stand-by during the march to the League Championship victory (he started at Numbers 4, 9 and 10).

He was restored to centre forward for the last 4 undefeated League games, completing a hat-trick of League Championship winner’s medals, with three different clubs—Shamrock Rovers, Limerick and Dundalk.

His second Dundalk season was spent mainly at right half and for a half dozen games he replaced the injured Timmy Lyons at centre half. For the historic European Cup tie win in Zurich, he was the travelling supporters’ man of the match, giving a superb display at centre-half.

A player-anywhere utility player, the departure of John Murphy saw Leo take on another role and for most of his last two club seasons he was the full-back partner of Tootsie McKeown, but was regularly called upon to fill all the right sided positions. A fan’s favourite, at the end of his last club season he was the supporters’ choice as Player of the Year.

While Dundalk were winning the League Championship under Alan Fox in 1966-67, Leo was with Drogheda and proceeded to lead their League marksman’s list with 7 strikes to bring his League career goals, with four clubs, to 52. His total goal haul in all League of Ireland competitions was 106, and which included 5 hat-tricks.

He had a subsequent spell at Drumcondra and finished his playing career with a number of seasons at Tullamore, winning the Intermediate Cup in 1970-71 and the League of Ireland ‘B’ Division in 1971-72. He was twice selected as Player of the Year while at Tullamore. By the time he quit he had collected mementos for every League of Ireland competition with the exception of the FAI Cup.

Before that he had taken up golf and in 1969 had won the captain’s prize at Baltinglass Golf Club. He then mastered pitch and putt, became a scratch handicapper, won over 200 open tournaments, was the 1979 National Strokeplay Champion, and in 2003 was inducted into the Pitch and Putt Hall of Fame. A motor mechanic, his last visit to Oriel Park was on the occasion of the re-union of the 1963 Championship team.

After replacing the snow-bound Hasty for the January league match in the Championship-winning 1962-63 season against Bohs and scoring a hat-trick, the Democrat described his performance as “… O’Reilly’s great game … outstanding …. Apart from his goals he was top-class in everything he did …great utility man.”