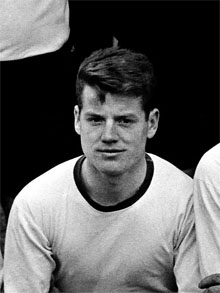 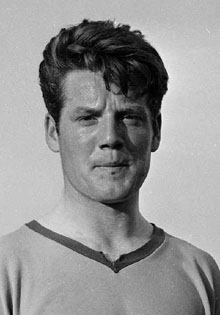 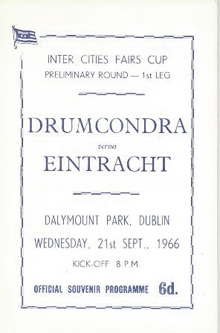 Equally at home in either wing, Joe McGrath came to Dundalk in September 1963, when the ‘wingers club’ already consisted of Stan Pownall, Davy McArdlle, and Billy Kennedy. But Joe elbowed his way on to the first team after scoring in each of the opening B team games and then scoring twice on his second senior game, a 4-1 Shield victory over Sligo Rovers that secured the Shield runner-up spot. Before the season ended that particular winger's club became even more crowded with the addition of Peter Gillespie, Vinny Fottrell and Tom Kelledy.

Joe’s role in 1964-65 was forward utility man, filling all five forward positions while leading the goal scoring lists for both League (10) and all games (21). When the Senior team’s League campaign was completed he pitched in with the reserves on their way to success in the Castrol Cup.

In his last season he paid the price for a six-in-a-row League loss sequence and he spent the later part of the year with the reserves before being transferred to Drumcondra. He appeared with Drums in their last four League games (making his debut in the late March clash against Dundalk) and the following June he was capped at the Under-23 level against France, in Ireland’s first International match at this level.

He spent the next few seasons with Limerick, scoring freely from the left wing. Limerick’s leading League scorer in 66-67 (9 goals), his 10 strikes in the following year complemented Andy McEvoy’s 13. Small and sturdy and an excellent goal poacher, he had pace and ball control, was hard to dispossess and on his favourite left wing slot was a difficult handful for opposing full backs.

Australia in April 1968 was his next port of call, and after a couple of years there he returned to Limerick for the 1970-71 season, when he added another three goals to his League tally and brought his 6-season League career count to 35, 13 with Dundalk and 22 with Limerick.

In the mid-80s he coached the Irish Under age squads, managing the under-16 squad in 1988 to its first appearance in the EUFA Finals. Roy Keane was one of the many young Irish footballers coached by McGrath during their formative years with the Irish underage panels and with a very successful FAS scheme.

After taking on the management of Kilkenny City in 1990, he was later appointed National Director of Coaching by the FAI. But in the Spring of 1996, amidst a period of high-publicity blood letting amongst the Council of the FAI, Joe resigned and headed for New Zealand where he took charge of the National team for a couple of years.

He returned to Ireland in 1998 to manage Bohemians, but in spite of signing five Kiwis a return of one point from the first five League games and an out of control budget saw Joe depart in early October after just nine games. Like his departure from the FAI two seasons previously, the airways were filled with stories of threatened legal action.

Joe’s last appearance on the National League scene was a return in 2000 to manage Kilkenny, in their one and only Premier Division season, and he resigned in March 2001 following a 7-3 loss to Bohemians in the semi-final of the FAI Cup.

His son, Derek, made his League debut with Shamrock Rovers and played in the League of Ireland for more than ten seasons, making over 300 appearances.