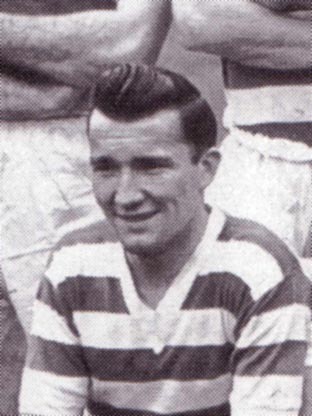 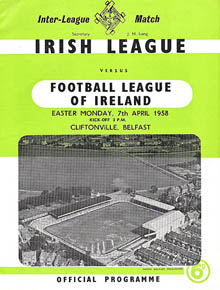 While he was recovering from injury Paddy Ambrose was temporarily regraded to play junior football for the 1952-53 year, when he spotted outside right Jimmy McCann and alerted Shamrock Rovers to his potential. A hat-trick against Waterford on his second senior outing confirmed Paddy’s judgement.

With his speed and accuracy from corners and crosses he created plenty of opportunities and in 9 seasons from 1953-54 with the all-conquering Shamrock Rovers, he won every honour. Joining Rovers along with Noel Peyton from St Marys East Wall, he had a League Championship medal in his first season and added further ones in 1956-57 and 1958-59.

He scored in the Old Trafford leg of the European Cup tie against Manchester United in September 1957 when a gallant Rovers performance kept the final score to a 3-2 loss, just a few months before the United team was decimated in the Munich plane disaster.

From 1955 he appeared in four consecutive FAI Cup finals, taking home two winner’s medals. In his only International appearance he was on the score sheet when Ireland defeated West Germany 3-0 in 1956 and in 4 League of Ireland Inter League appearances he accounted for 3 goals. In 1958 he earned two Irish ‘B’ caps.

After the arrival of Frank O’Neill at Milltown Jimmy moved to Drumcondra in 1962 for a couple of seasons. He shared in their famous Fairs Cup win in 1962 against Danish club Odense, contributing a goal to the 6-5 aggregate victory, before coming to Oriel Park for the 1964-65 year.

He showed early on that the old magic was still there—scoring on his debut and finding the net in four games in his first 7 starts—but a bad team spell before Christmas (one win in nine outings) saw Jimmy with the reserves, replaced by Jim Smith, and he made just one first team appearance after Christmas.

Before Christmas he had been on the team that defeated Shamrock Rovers to take the Presidents Cup to Dundalk after a replay and he added a runner-up award when on the losing side to non-League Home Farm in the St Stephens Day final of the Leinster Senior Cup.

A single League goal with Dundalk brought his 11-season career League of Ireland goals to 55 (Shamrock Rovers 46; Drumcondra 8; Dundalk 1). Jimmy finished his career with Transport in the Leinster Senior League.

In February 2008, during the commemorative ceremonies to mark the 50th anniversary of the Munich disaster, two players were invited from each team that had played against Manchester United that year. The representatives selected by Shamrock Rovers were Jimmy and Liam Hennessy.