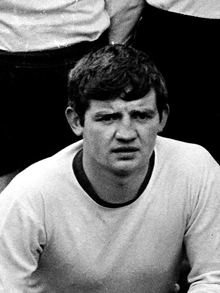 Whitehall-based Brendan Masterson served his football apprenticeship with Stella Maris, under the management of Dicky Giles, the father of Johnny Giles. He spent a while with Manchester United but returned to Dublin, joining the Drumcondra Youth squad in 1958, collecting an FAI Youth Cup medal in 1960 when Drums got the better of Sligo United in the final.

He scored on his debut League game in November 1960 against Cork Celtic and over the next couple of seasons he gained competition honours with Drumcondra in the Shield, Top Four Cup etc. During Drums League Championship victory in 1961-62 his role was as cover for wing-half Robert Prole.

There was a big clean out at Drumcondra at the end of 1963-64, paving the way for another Championship Pennant at Tolka in the following season, and Brendan was one of a group of five who ended up with Dundalk, in the company of his Tolka teammates Alf Girvin, Sammy Caswell, Ray Bushe and Maxie McCann. He spent the first half of the 1964-65 season in a variety of defensive positions before settling at left-half. But an injury to Timmy Lyons saw Brendan finish the year at centre half.

He added a Presidents Cup medal to his collection after Shamrock Rovers were defeated 4-2 in a November replay at Dalymount Park but was on the losing side in the final of the Leinster Senior Cup to Home Farm. His second season was pretty much more of the same, with frequent calls to cover for the injured Lyons.

Remaining with Dundalk for the 1966-67 League Championship victory under Alan Fox, he was not required for first team duty and spent the year with the Reserves team, who played their home games that year at Castlebellingham. He went to Limerick for the 1967-68 year and because of recurring injury problems he then retired from senior football, joining St Brendan’s (Grangegorman) in the Leinster Senior League and later Belgrove in the League of Ireland ‘B’ Division.

His last hurrah saw him return to Drumcondra, under Amby Fogarty, for the 1971-72 season, thirteen years after he joined their youth squad. He played in the last match of the year, and Drumcondra’s last game after completing 44 League seasons, when a 1-1 draw against Shelbourne avoided the need to apply for re-election. However, it was all in vain as Home Farm took over the club during the close season and Drumcondra were no more.

Brendan later had spells managing with Leinster Senior League teams Belgrove (where he won the Metropolitan Cup), Bluebell United and AIB. Now retired, he worked as a foreman with the steel company J S Lister.