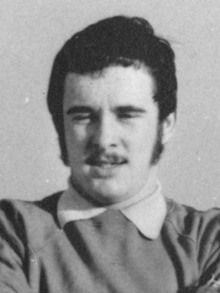 A goal keeping crisis at the beginning of Tommy Rowe’s first full year in charge lead to the signing of two fledgling custodians for the 1968-69 year, junior Pat Lawless and 17-year old youths player Tony Keogh, while awaiting the return of the suspended Kevin Blount.

The ex-Home Farm keeper got just one start in the season but he was on bench duty for the club’s Fairs Cup games in Utrecht and Glasgow Rangers and in January was with the Irish Youths’ Squad playing against the IFA Youths. Maurice Swan took over in December and until the end of the 1969-70 year Tony was on Reserve team duty.

The departure of Swan finally gave Tony his opportunity for an extended run and his near ever-present appearances—39 from 41 games—included victory in the Leinster Cup with a stunning 5-2 win over Shamrock Rovers on St Stephen’s Day. He continued his good form into the following year until an early season injury forced him to give way until February to Brendan Muckian.

While the 1972-73 season was overshadowed by off-field efforts to save the club from going to the wall, under new manager Fran Brennan Tony had an outstanding year and was rewarded by his selection as the Supporters’ choice for Player of the Year. In a truly dreadful season, Tony had limited the goal concessions to a maximum of one goal in 25 games.

For his last club season he was serving under his fourth manager—Rowe, Tuohy, Fran Brennan and now John Smith—and he paid the price for a 9-match winless League run in November and December, being replaced by Jim Finnegan in the New Year.

After he was selected as Player of the Year for the 1972-73 season, the Democrat was generous in its praise: “In a disappointing season he was one of the few that stood out. He missed just one game and on many occasions his performances saved us from some heavy defeats. A well deserved honour.”